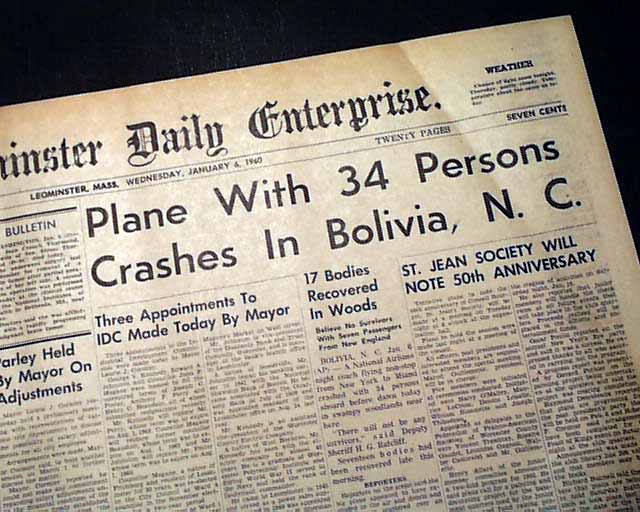 This 20 page newspaper has a five column headline on the front page: "Plane With 34 Persons Crashes In Bolivia, N.C." with subheads. (see)

The aircraft had been called into service on short notice when the normal aircraft used for the evening flight to Miami, a Boeing 707 jet identified as Flight 601, was grounded due to a cracked window. Most of the passengers who were to have flown on Flight 601 boarded a Lockheed Electra, registration N5003K; those who could not be accommodated on the Electra were boarded on Flight 2511.

Flight 2511 departed Idlewild over two hours late, at 11:34 PM. The flight was routine until shortly after passing Wilmington, North Carolina. At 3:31 AM Eastern Standard Time, one of the pilots on the flight contacted National Airways' company radio station at Wilmington to pass on a routine progress report. At 3:38 AM, the aircraft suddenly entered a wide descending right turn and crashed 1-1/2 miles north-west of Bolivia.

The airline was informed of the location of Flight 2511 at around 7:00 AM, when Richard Randolph telephoned its dispatch office in Wilmington to advise that there was airplane wreckage in the field near his house. This wreckage was later identified as that of Flight 2511.

During the recovery, it was discovered that the remains of one passenger, Julian A. Frank, a lawyer from New York City, were missing from the accident site. His body was eventually found sixteen miles away at a place called Snow's Marsh west of the Cape Fear River. While autopsies of the crew and remaining passengers showed that all had died due to crash forces, Frank's autopsy showed that he had been fatally injured by a dynamite explosion originating either in his lap or (more likely) immediately under his seat. A number of wires and metal fragments identified as parts of a bomb were found to have embedded themselves in his body, mainly in the arms and legs. Extensive searches of the aircraft fuselage revealed bone and bomb fragments surrounding the seat which had been assigned to Frank on boarding.

Investigators suspected that Frank had taken the bomb aboard the aircraft willingly, and that the bombing was therefore a murder-suicide.The points that led them to believe that Frank was culpable include:

* The bomb exploded at 3:38 AM, hours after the original Flight 601 was scheduled to land at Miami. Had the bomb been placed on Flight 2511 by a party not on the aircraft at the time, it should have been set to detonate at a time when Flight 601 would have been in the air.
* The aircraft had not been in use for some time before it was called into service to replace the Boeing 707 that had been grounded, and it was therefore unlikely that the bomb was on the aircraft before boarding.
* Frank had been under investigation for fraud and embezzlement at the time of his death, and had also taken out large amounts of life insurance shortly before boarding the aircraft.
* The explosion was in immediate proximity to Frank, either in his lap or immediately under his seat.

There was, however, other evidence that made it less than certain that Frank was culpable. These include:

* On November 16, 1959, less than two months before the crash of Flight 2511, National Airlines Flight 967 disappeared over the Gulf of Mexico. Although the aircraft was lost at sea and the Civil Aeronautics Board could not determine a probable cause for the accident, it was believed that the aircraft had been destroyed by a dynamite bomb. Investigators discovered that a small-time crook named William Taylor had boarded the aircraft on a ticket belonging to Richard Spears, a convicted felon who had befriended Taylor in prison and who had taken out over $100,000.00 worth of life insurance on himself. They hypothesized that Taylor had boarded the aircraft with luggage packed by Spears and, unbeknownst to Taylor, containing a bomb.
* Frank's purchase of life insurance before boarding a flight was not at all unusual in 1960. Airports even had vending machines that issued insurance policies good for the duration of the flight.
* Frank was a commercial lawyer and was not thought to have the knowledge necessary to build an explosive device.

No charges were laid in the bombing. The investigation officially remains open.

Had the bomb detonated on Flight 601, the Boeing 707 originally scheduled to fly the route, 105 passengers and an unknown number of crew would have been killed. It would also have been the first crash of a Boeing jet in passenger service. (Two accidents had occurred on training flights in 1959.)