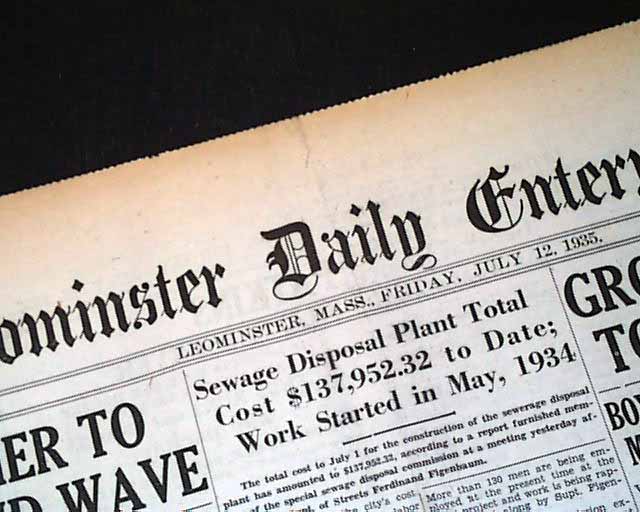 This 8 page newspaper has a small one column headline on the front page: "Melvin Purvis Resigns from Dep't of Justice"

Tells of the resignation of famous G-Man head Melvin Purvis.

Other news of the day. A few tiny binding holes along the spine, otherwise in good condition..

wikipedia notes: Melvin Horace Purvis, Jr. (October 24, 1903 – February 29, 1960) was an American lawman and Federal Bureau of Investigation (FBI) agent. He had the nickname "Little Mel" because of his short stature.

Purvis received his law degree from the University of South Carolina and had a brief career as a lawyer. Purvis was a member of the Kappa Alpha Order while attending the University of South Carolina. He joined the FBI in 1927, and headed the Division of Investigation offices in Birmingham, Alabama, Oklahoma City, and Cincinnati. In 1932 he was placed in charge of the Chicago office by Bureau of Investigation Director J. Edgar Hoover. He was a well-educated, brave man, known to be a crack shot. He captured more public enemies than any other Agent in FBI history, a record that still stands.

Purvis led the manhunts that tracked such outlaws as Baby Face Nelson and Pretty Boy Floyd, and most famously John Dillinger, which ended in Chicago on July 22, 1934. However, after Purvis became a media figure for this feat, J. Edgar Hoover claimed that Purvis had been demoted and that Agent Samuel P. Cowley had been put in charge of the Dillinger case. Cowley was later shot by Baby Face Nelson and Purvis visited him in hospital shortly before he died. Purvis was praised for his actions but reportedly incurred the wrath of Hoover, who had previously supported him, as Purvis sought and achieved publicity for his own role, overshadowing Hoover and the rest of the FBI. In a book co-authored by Purvis's son Alston Purvis, Hoover is portrayed as jealous of the attention given to Purvis after Dillinger was killed.

However, at least one of Purvis' official accounts of his exploits was later called into question. The account of the death of Pretty Boy Floyd, which indicated that Purvis and his agents had killed him with no assistance from local law enforcement, was later discounted by the local East Liverpool, Ohio officer Chester Smith, who Hoover later claimed shot Floyd first. Smith further stated that Purvis and his agents never fired until after Floyd had been questioned by Purvis, at which point Purvis ordered Agent Herman Hollis to shoot Floyd, who was by then lying on the ground. That claim was discounted later by FBI Agent Winfred E. Hopton, who claimed in a 1976 Time magazine article that local law enforcement did not arrive until after Floyd had died. However, local authorities all agreed that Chester Smith did in fact shoot Floyd. Neither claim has been clearly proven one way or the other. Purvis resigned from the FBI in 1935 and afterward practiced law. In 1937 he became engaged to the actress Janice Jarratt, but they never married. He later would marry Marie Rosanne Willcox and have three sons. He bought radio station WOLH in Florence, South Carolina, and during World War II he served in the army as a colonel.

In 1936, Purvis published a memoir of his years as an investigator with the Bureau; the book was entitled American Agent. Authors Curt Gentry and Anthony Summers, in their respective 1990s biographies of Hoover, assert that Hoover, who was initially supportive of Purvis, was jealous of Purvis's fame after the Dillinger escapade, and thereafter demoted him, leading to Purvis leaving the FBI.