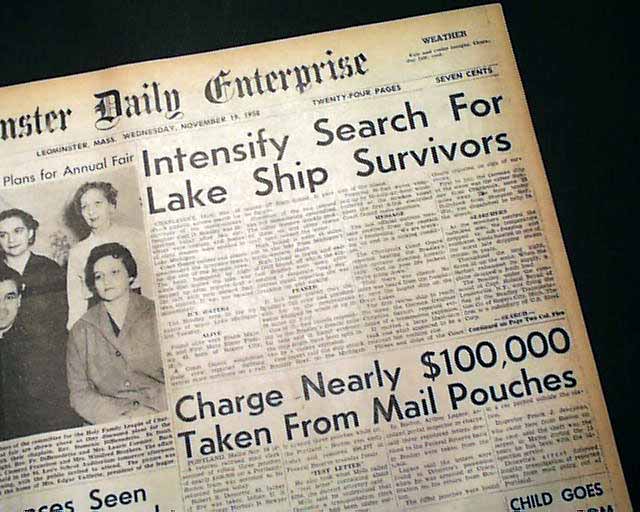 This 24 page newspaper has a four column headline on the front page: "Intensify Search For Lake Ship Survivors"

wikipedia notes: The Bradley met its fate on 18 November 1958. The previous day, it had unloaded a cargo of crushed stone at Gary, Indiana. Northbound, it coasted along the Wisconsin shore in ballast as seas gathered strength from the southwest. It was the deadhead half of the boat's final scheduled voyage of the 1958 season, which was ending because of the deteriorating climatic conditions of late fall.

The Bradley was scheduled to head to Manitowoc, Wisconsin for repairs when laid up over the winter. A rusting cargo hold had been set for an $800,000 replacement in the prior year. However, its owner, Bradley Transportation Company (a U.S. Steel subsidiary) pushed back the repair. Meanwhile, a radio call from headquarters ordered one more stone delivery before the layup. This proved to be the demise of the Bradley. She encountered a storm with 65 mile per hour winds and 20-foot (6.1 m) waves. Despite these conditions, which "compelled other freighter captains to take shelter" along the shore, Captain Roland Bryan, known as a 'heavy weather man,' headed into Lake Michigan bearing northeast from the Door County Peninsula toward the Mackinac Straits.

Continuing on this course, by 5:35 p.m. the ship was about 12 miles (19 km) southwest of Gull Island. At this moment the hull of the vessel sagged alarmingly and began to break in two. The first mate managed to radio three separate transmissions of mayday before the power lines aboard the ship were severed. An order was given to abandon ship, but the Bradley sank before any life saving craft could be effectively launched.

A German cargo vessel, the Christian Sartori, witnessed the sinking. However, the wind and waves were so fierce that it took her two hours to traverse the four miles that separated the vessels.

The distress call was picked up by the Coast Guard. Despite grave peril, the USCG Cutter Sundew went forth out from a safe mooring in Charlevoix, Michigan into the open lake, still lashed by the teeth of an unremitting gale. Coast Guard Station Charlevoix also launched a 36 foot motor lifeboat in an attempt to reach the Bradley, but was ordered back after being mercilessly tossed about on Lake Michigan.

United States Coast Guard air and surface units and other commercial vessels searched for survivors throughout the night and into the next morning. At 8:25am on 19 November, the Sundew located the Bradley's forward life raft 5 miles (8.0 km) northeast of Gull Island with two survivors aboard — First Mate Elmer H. Fleming, 43, and Deck Watchman Frank L. Mays, 26. Another crew member from the Bradley, deckwatch Gary Strelecki was also found alive, but sadly died not long after being rescued. Throughout the night and the following days, the Sundew and other vessels recovered 17 more bodies, many of which were brought to Charlevoix City Hall for family identification. In all, 33 crewmen lost their lives. The bodies of the 15 men not recovered remain missing to this day.