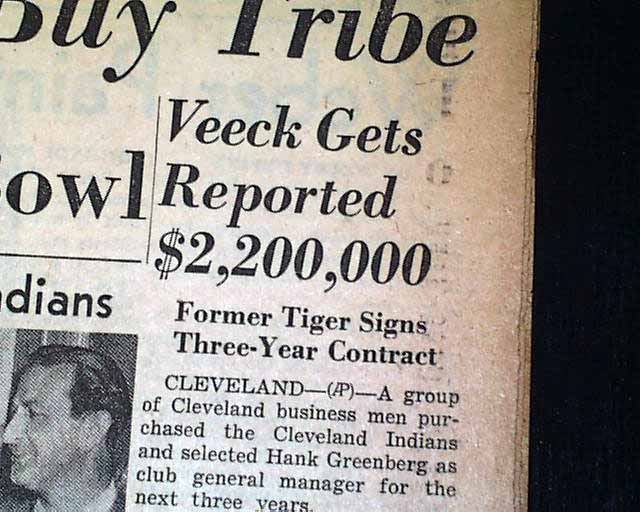 This 30 page newspaper has a headline above the masthead on the front page: "Hank Greenberg Becomes Indians' General Manager"

Other news of the day throughout. Light browning with some small binding holes along the spine, otherwise in good condition.

wikipedia notes: In 1946, Veeck finally became the owner of a major league team, the Cleveland Indians, using a debenture-common stock group making remuneration to his partners non-taxable loan payments instead of taxable income. He immediately put the team's games on radio, and set about putting his own indelible stamp on the franchise. The Indians moved to the cavernous Cleveland Municipal Stadium for good in 1947.

That year he signed Larry Doby as the first African-American player in the American League, then followed that one year later by inking Satchel Paige to a contract, making the hurler the oldest rookie in major league history; there was much speculation at the time about Paige's true age, with most sources stating that he was 42 when he joined the Indians. Many sports writers mocked Veeck's decision to sign Paige. One wrote that if Paige had been white, no one would have thought to sign him. Veeck countered, "If Satchel had been white, he would have been in the majors 20 years ago."

Although Veeck's image has long been considered fan-friendly, his actions during the early part of the 1947 season briefly presented a different view. When the city of Cleveland began renting Cleveland Stadium for midget auto racing, an activity that often left the field in a shambles, Veeck hinted that he might consider moving the team to the then-virgin territory of Los Angeles, or back to the team's own outmoded and inadequate stadium, League Park. However, after the two sides discussed the issue, the matter was settled.

As in Milwaukee, Veeck took a whimsical approach to promotions, hiring rubber-faced Max Patkin, the "Clown Prince of Baseball", as a coach. Patkin's appearance in the coaching box delighted fans and infuriated the front office of the American League.

Although Veeck had become extremely popular, an attempt in 1947 to trade more popular player-manager Lou Boudreau to the St. Louis Browns led to mass protests and petitions supporting Boudreau. Veeck, in response, visited every bar in Cleveland apologizing for his mistake, and reassuring fans that the trade would not occur (by Veeck's account, the proposed deal was already dead).

By 1948, led by Boudreau's .355 batting average, Cleveland won its first pennant and World Series since 1920. Famously, the following season Veeck buried the 1948 flag, once it became obvious the team could not repeat its championship in 1949. Later that year Veeck's first wife divorced him. Most of his money was tied up in the Indians, so he was forced to sell the team to fund the divorce settlement.