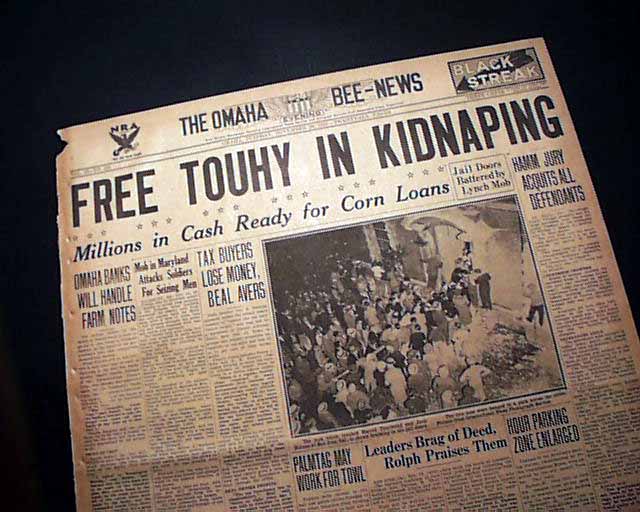 This 24 page newspaper has a great banner headline on the front page: "FREE TOUHY IN KIDNAPPING" with subhead. (see) Tells of Chicago mob boss Roger Touhy being acquitted for the kidnapping of millionaire William J. Hamm Jr.

Also on the front page is a great photo of the lynch mob breaking into the San Jose, CA jail to lynch Jack Holmes and Thomas H. Thurmond with headline. (see)

wikipedia notes: Roger Touhy (1898-December 16, 1959) was an Irish-American-era mob boss from Chicago, Illinois. He is best known for being framed for the 1933 faked kidnapping of John "Jake the Barber" Factor, a brother of cosmetics manufacturer Max Factor, Sr. Despite numerous appeals and at least one court ruling freeing him, Touhy was not released from prison until November 1959. He was murdered by the Chicago Outfit less than a month later.

On November 13, 1959, Touhy was granted parole for his escape. He left Stateville on November 24, 1959 — 25 years and nine months to the day after his incarceration. Ironically, two days later, a federal judge refused to throw out his 1933 conviction despite convincing evidence of prosecutorial misconduct and perjury.