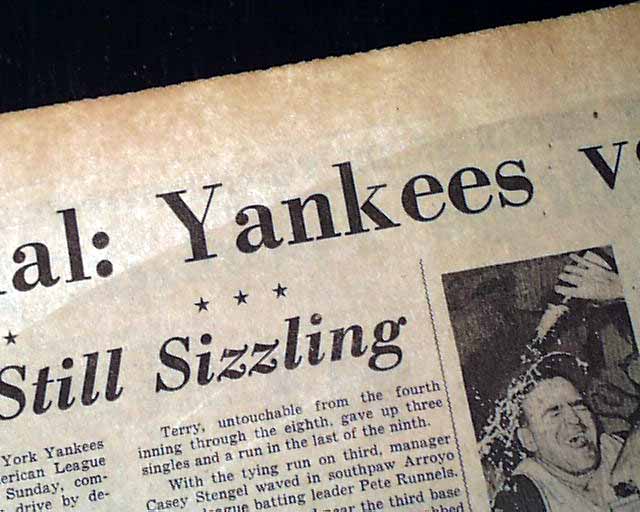 This 40 page newspaper has a banner headline on page 33: "It's Official: Yankees vs. the Pirates" with subheads, box scores and photo of Ralph Terry. (see)

Tells of the New York Yankees defeating the Boston Red Sox to clinch the American League pennant. This was 70-year old Casey Stengel's tenth and last pennant as he would be let go by the Yanks and be replaced by Ralph Houk next season.

Other news of the day throughout. Some small binding holes along the spine, otherwise good condition.

wikipedia notes: The New York Yankees' 1960 season was the 58th season for the Yankees. The team finished with a record of 97-57, winning their 25th pennant, finishing 8 games ahead of the Baltimore Orioles. New York was managed by Casey Stengel. The Yankees played their home games at Yankee Stadium. Elston Howard took over as the everyday catcher, while Yogi Berra went into the outfield. In the World Series, they were defeated by the Pittsburgh Pirates in 7 games.