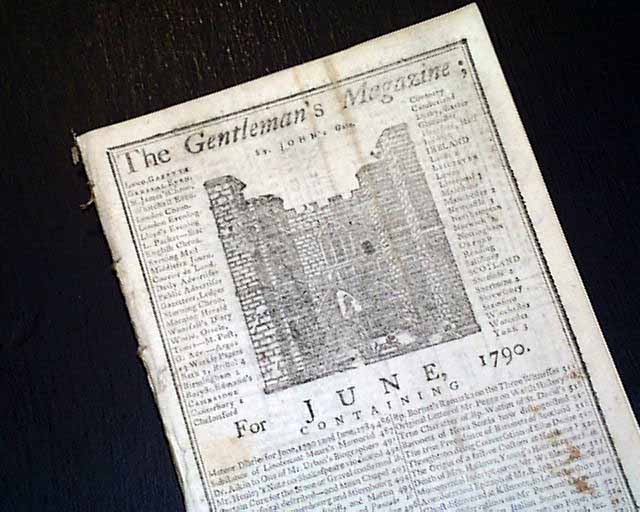 A very nice magazine from the late 18th century with a wide range of varied content including news of the day, political reports, literary items, and other unusual tidbits. This was the first periodical to use the word "magazine" in its title, having begun in 1731 and lasting until 1907.
The most significant item in this issue is a report of the death of Benjamin Franklin listed near the back under the "Deaths" column. It begins: "At Philadelphia, aged 84 years and 3 months, Benjamin Franklin, esq. L.L.D. and F.R.S. He was born in 1706..." continuing on with more on his life & concluding with a letter concerning the death of his brother, signed in type: B.F. There is also a lengthy footnote taking over 1 1/2 pages with more on his life & work. This portion concludes with his famous self-written epitaph which begins: "The body of Benjamin Franklin, Printer, like the cover of an old book, its content torn out & stript of its lettering & gilding, lies here food for worms..." with more (see). This is followed by more on his life. An uncommonly lengthy obituary report, but then Franklin was  extremely well known & respected throughout Europe.
Among the articles within this issue are: "Institutions on the Continent for Studying Veterinary Medicine" "Impolicy of Imposing Celibacy on the Fellows of Colleges" "Physical Disquisition on the Colour & Strength of Hair", much on: "Review of New Publications" and more.
Near the back is a section headed: "Foreign Affairs" and "Domestic Occurrences" which contain current news reports including "Important Proceedings of the National Assembly in France" and a small section headed: "America" with trade regulations and a report from the federal mint (see).
Complete in 94 pages including all three plates called for (see). Full title/contents page with an engraving of St. John's Gate, measures 5 by 8 1/2 inches. Scattered foxing throughout, more so to the title page, otherwise very nice condition.