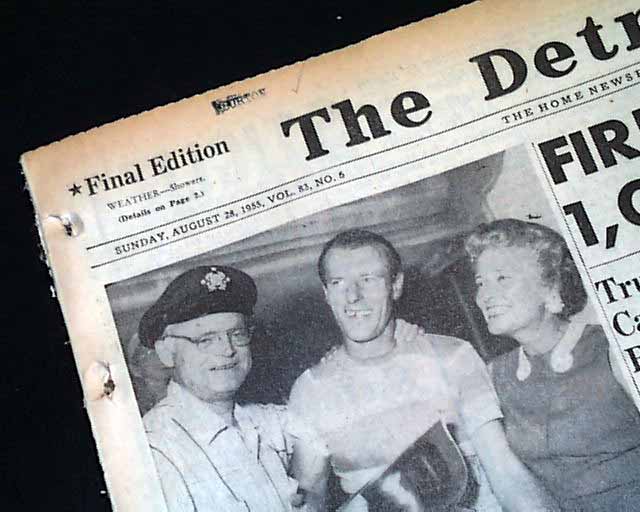 This 100+ page newspaper has a one column headline on the front page of the sport's section: "Bonus Baby Strikes Out 14 in 2-Hitter" with box score. (see)

Other news of the day throughout. Some small binding holes along the spine which slightly affects mentioned report, otherwise good.

wikipedia notes: Because Koufax's signing bonus was greater than $4,000 ($32,378 in current dollar terms), he was known as a bonus baby. This forced the Dodgers to keep him on the major league roster for at least two years before he could be sent to the minors. To make room for him, the Dodgers optioned their future manager, Tommy Lasorda, to the Montreal Royals of the International League. Lasorda would later joke that it took Sandy Koufax to keep him off the Dodger pitching staff.

Koufax made his major league debut on June 24 1955 against the Milwaukee Braves, with the Dodgers trailing 7–1 in the fifth inning. Johnny Logan, the first batter Koufax faced, hit a bloop single. Eddie Mathews bunted, but Koufax threw the ball into center field. Koufax walked Hank Aaron on four pitches to load the bases, then struck out Bobby Thomson on a full count.

Koufax's first start was on July 6. He lasted only 4 â innings, giving up eight walks. He did not start again for almost two months, but on August 27, Koufax threw a two-hit, 7–0 complete game shutout against the Cincinnati Reds for his first major league win. Koufax made only 12 appearances in 1955, pitching 41.7 innings and walking almost as many men as he struck out. His only other win in 1955 was also a shutout.