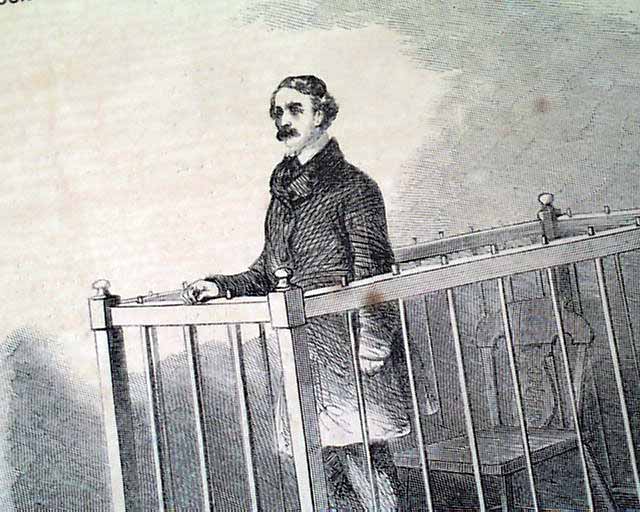 This issue has much coverage of the historic Daniel Sickles trial. This was the first use of a plea of temporary insanity by a criminal defendant making this a noteworthy case in American legal history.
The ftpg. shows "Mode of Swearing in the Jury..." and a sketch of the complete jury. Two pages inside have various prints relating to the trial including one of Sickles in the dock, the various attorneys, etc. Other prints within include "Michael Phelan, the Billiard Champion of America" and several prints of "Chickerings Pianoforte Manufactory".
Sixteen pages, never bound nor trimmed, wear at the margins, various dirtiness & staining, some tears at the spine.

As an antebellum New York politician, Sickles was involved in a number of public scandals, most notably the killing of his wife's lover, Philip Barton Key, son of Francis Scott Key. He was acquitted with the first use of temporary insanity as a legal defense in U.S. history. He became one of the most prominent political generals of the Civil War. At the Battle of Gettysburg, he insubordinately moved his III Corps to a position in which it was virtually destroyed, an action that continues to generate controversy. His combat career ended at Gettysburg when his leg was struck by cannon fire.