Home > The Declaration of Independence...
Click image to enlarge 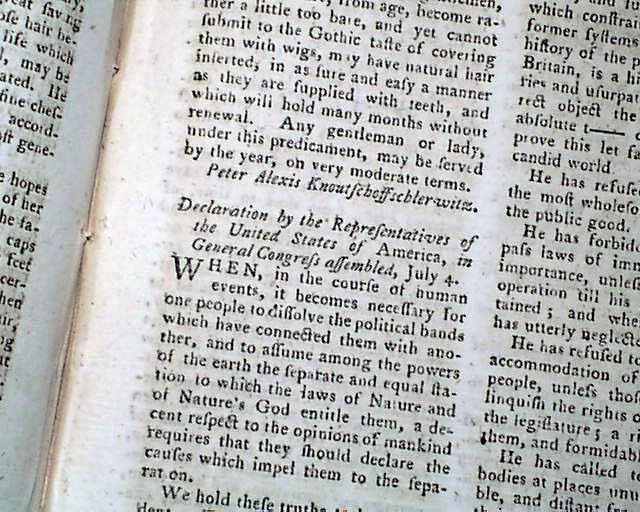 Item # 571146 THE GENTLEMAN'S MAGAZINE, London, August, 1776  It would be difficult to argue for a more important document in American history than the Declaration of Independence. It remains a desire of most collectors to find an issue containing reference to it, and ultimately a contemporary printing of the actual document. With American newspaper printings commanding $50,000 or more in nice condition, here is an opportunity for a period printing at a very reasonable price.
The title/contents page of this issue, with a decorative engraving, includes: "Declaration of American Independency 361" referencing the page with the actual printing which is headed: "Declaration by the Representatives of the United States of America, in General Congress Assembled, July 4", with the complete text beginning with the famous words: "When in the course of human events...". The document concludes on the following page and is signed in type by: John Hancock (see the photos for the complete printing).
One can imagine the reaction in England to those reading this report in their own magazine! A keystone issue for any collection of American history.
Although it pales in comparison, the back several pages do contain various reports from America on the Revolutionary War under the heading: "Proceedings of the American Colonies". This text begins with: "In the preceding part of this magazine the reader will find the Declaration of Independency issued by the American Congress, with a recapitulation of the grievances which have forced them into that desperate measure. Whether those grievances were real or imaginary, or whether they did or did not deserve a parliamentary enquiry, we will not presume to decide. The ball is now struck, and time only can shew where it will rest..." (see).
This issue is complete with the full page plate called for, being a nice view of Chepstow Castle (see). Contains 52 pages, disbound, and is in excellent, clean condition.

The British evacuate Savannah, and so...