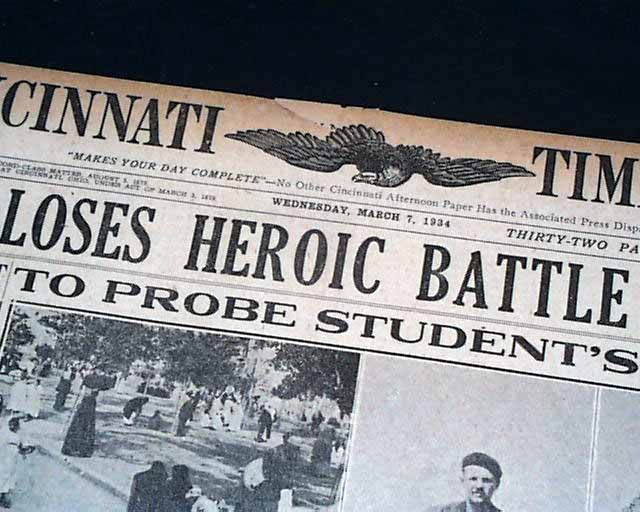 John Dillinger was one of the main figures in history for causing the establishment of the FBI that is so well known today.

This was one of the most famous escapes from a high security jail in United States history.

Other news of the day throughout. Usual browning with some margin wear and tear including a severe tear in the last column (see photo). Should be handled with care.

Dillinger further embarrassed the town, as well as then-42-year-old Sheriff Lillian Holley, by driving off in her brand new V-8 Ford. The press augmented her chagrin with such headlines as: "Slim woman, mother of twins, controlled Dillinger as sheriff."[3]

Incensed, Holley declared at the time, "If I ever see John Dillinger again, I'll shoot him dead with my own gun. Don't blame anyone else for this escape. Blame me. I have no political career ahead of me and I don't care."

Dillinger would then be the main focus in one of America's most desperate manhunts.

NEWSPAPER FROM 1934
NOT A REPRINT!
FAMOUS WOODEN GUN ESCAPE *

Complete 130 page issue with report of John Dillinger on the run just after his famous escape from Crown Point, Indiana County jail.