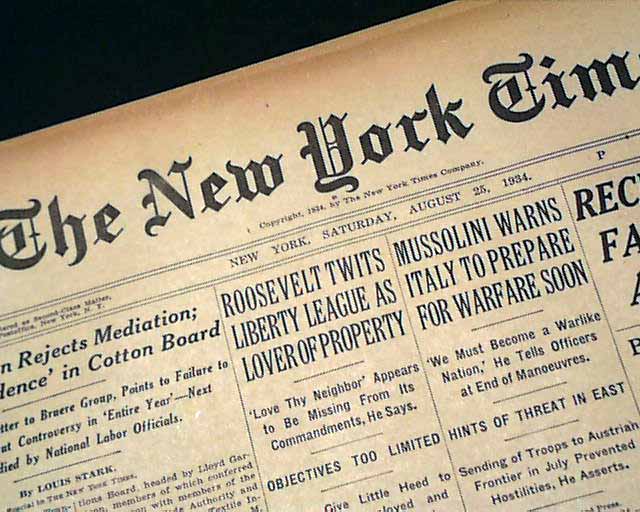 This 28 page newspaper has one column headlines on page 3 that include: "VAN METER'S LOOT SOUGHT FROM GIRL" "Waitress, Whose Kin Turned Up Gangster, Is Asked About His Hideout in St. Paul" "'Baby Face' Is Hunted as Last Dillinger Man" and more. (see) Nice to have in this famous NYC title.

source: wikipedia: On July 22, 1934, FBI agents led by Melvin Purvis and Samuel Cowley gunned down John Dillinger in front of the Biograph Theater in Chicago. That night, Van Meter and his girlfriend Marie Comforti fled to St. Paul.

On August 23, at the corner of Marion Street and University Avenue in St. Paul, Van Meter was confronted by four police officers, including Chief of Police Frank Cullen, former chief Thomas Brown and two detectives, all heavily armed. The officers later claimed Van Meter ignored their command to stop and fled into a nearby alley, where he opened fire on the officers, at which time the officers returned fire, killing Van Meter.

The number and severity of Van Meter's wounds--he was shot dozens of times, and several of his fingers were shot off--would cause some to label the incident an "ambush" or an example of "police execution"[citation needed]. Van Meter's family would later say their kin had been used for "target practice".

The four officers reported $1,323 found on Van Meter, although his friends and associates claimed he was carrying at least $10,000 on that day. In 1939, the FBI announced that it believed St. Paul gangster Harry Sawyer had set up Van Meter to get at his money, splitting the take with the four ranking officers who did the shooting.[1]