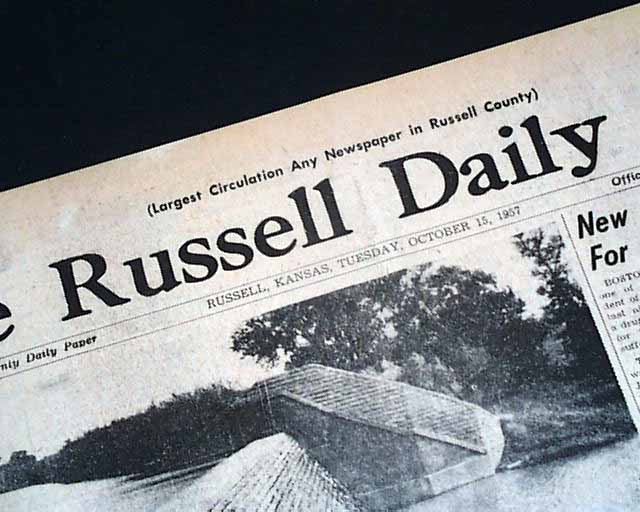 This 6 page newspaper has one column headlines on the front page that read: "Top Scientists Brief Eisenhower On red Sputnik" "Sputnik Changes Course in Orbit"

This event shocked the American scientific community and sufficiently scared the Americans into an all out space race. There was great fear at the time of Soviet dominance of space and the potential use of satellites for military purposes.

wiikipedia notes: Sputnik 1 was the world's first Earth-orbiting artificial satellite. It was launched into a low altitude elliptical orbit by the Soviet Union on October 4, 1957, and was the first in a series of satellites collectively known as the Sputnik program. The unanticipated announcement of Sputnik 1's success precipitated the Sputnik crisis in the United States and ignited the Space Race within the Cold War.

Apart from its value as a technological first, Sputnik also helped to identify the upper atmospheric layer's density, through measuring the satellite's orbital changes. It also provided data on radio-signal distribution in the ionosphere. Pressurized nitrogen, in the satellite's body, provided the first opportunity for meteoroid detection. If a meteoroid penetrated the satellite's outer hull, it would be detected by the temperature data sent back to Earth.

Sputnik-1 was launched during the International Geophysical Year from Site No.1, at the 5th Tyuratam range, in Kazakh SSR (now at the Baikonur Cosmodrome). The satellite traveled at 29,000 kilometres (18,000 mi) per hour, taking 96.2 minutes to complete an orbit, and emitted radio signals at 20.005 and 40.002 MHz[1] which were monitored by amateur radio operators throughout the world. The signals continued for 22 days until the transmitter batteries ran out on October 26, 1957. Sputnik 1 burned up on January 4, 1958 as it fell from orbit upon reentering Earth's atmosphere, after traveling about 60 million km (37 million miles) and spending 3 months in orbit.