Home > Back to Search Results > News from America... Pardon to deserters...
Click image to enlarge 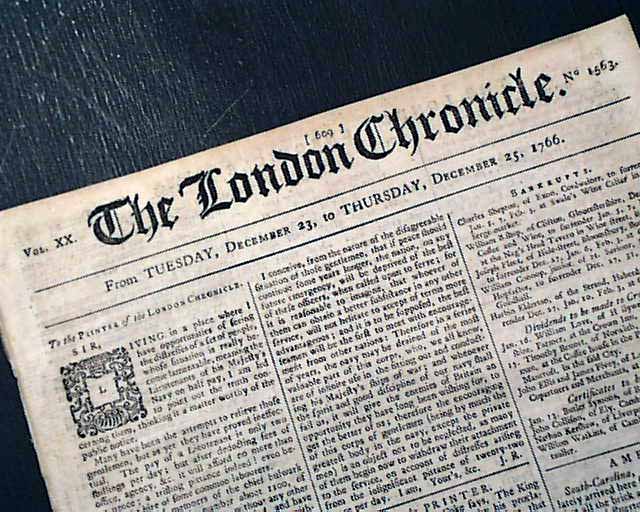 News from America... Pardon to deserters...


THE LONDON CHRONICLE, England, Dec. 25, 1766  The front page has some reports headed: "America", including: "The last letters from West Florida and New Orleans advise that the war between the Chactahs and Creeks with still carried on with the utmost inveteracy...". Another report has some reflection upon the events near Quebec (see).
The back page has additional American news, including in part: "...to the Hon. Guy Carleton, our Lieut. Governor, that several deserters wander about this province in great distress for fear of punishment justly due to their crimes; in compassion to their distresses & to encourage them for the future to fulfill their engagements, his excellency has given public notice that he will grant his Majesty's most gracious pardon to all deserters from any regiments which have been or are in America..." with a bit more (see).
Eight pages, 8 by 11 inches, close-trimmed at the bottom of pg. 2 does not affect mentioned  text.