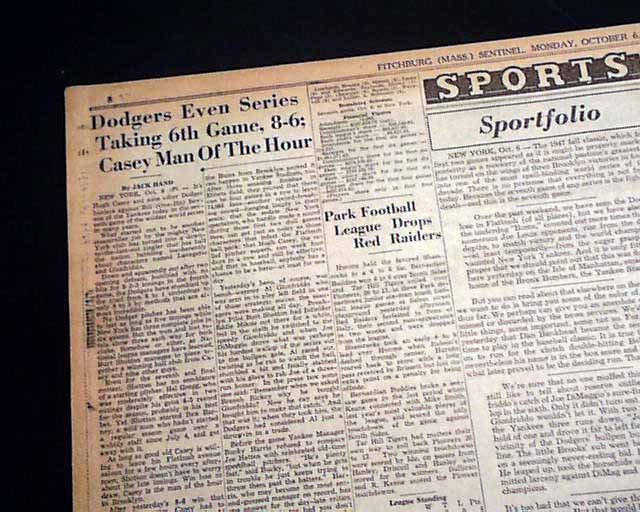 This 14 page newspaper has a two column headline on page 8: "Dodgers Even Series Taking 6th Game, 8-6; Casey Man Of The Hour".

wikipedia notes: Gionfriddo was acquired by the Brooklyn Dodgers from the Pirates midway through the 1947 season and he is most famous for his heroic catch of a drive off the bat of the New York Yankee's Joe DiMaggio in Game 6 of the 1947 World Series. The Dodgers led the Yankees 8-5 going into the bottom of the 6th inning when Gionfriddo was brought in as a defensive replacement. Snuffy Stirnweiss and Yogi Berra were on base when DiMaggio drove the ball to the 415 marker. Gionfriddo raced across the field and reached over the fence to catch the ball. In one of the most famous images in baseball history, the taciturn DiMaggio shook his head and kicked at the dirt in frustration.