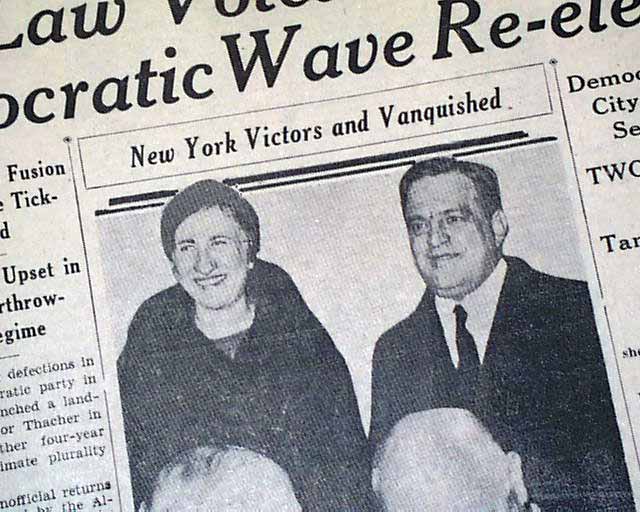 This 36 page newspaper has a two column photo on the front page with caption: "New York Victors and Vanquished"

wikipedia notes: La Guardia was elected mayor of New York City on an anti-corruption Fusion ticket during the Great Depression, which united him in an uneasy alliance with New York's Jewish population and liberal bluebloods (WASPs). These included the architect and historian Isaac Newton Phelps-Stokes whose patrician manners La Guardia detested. Surprisingly, the two men became friends. Phelps-Stokes had nursed his wife during the last five years of her life, during which she was paralyzed and speechless due to a series of strokes. On learning of Phelps-Stokes's experience, so like his own, La Guardia ceased bickering and the two developed genuine affection.
Fiorello La Guardia statue at LaGuardia Place in Greenwich Village, NYC

Being of Italian descent and growing up in a time when crime and criminals were prevalent in New York, La Guardia loathed the gangsters who brought a negative stereotype and shame to the Italian community. When he was elected to his first term in 1933, the first thing he did after being sworn in was to pick up the phone and order the chief of police to arrest mob boss Lucky Luciano on whatever charges could be found. La Guardia then went after the gangsters with a vengeance, stating in a radio address to the people of New York in his high-pitched, squeaky voice, "Let's drive the bums out of town." In 1934, La Guardia went on a search-and-destroy mission looking for mob boss Frank Costello's slot machines, which La Guardia executed with gusto, rounding up thousands of the "one armed bandits", swinging a sledgehammer and dumping them off a barge into the water for the newspapers and media. In 1936, La Guardia had special prosecutor Thomas E. Dewey, a future Republican presidential candidate, single out Lucky Luciano for prosecution. Dewey led a successful investigation into Luciano's lucrative prostitution operation, eventually sending Luciano to jail with a 30-50 year sentence. The case was made into the 1937 movie 'Marked Woman', starring Bette Davis.

La Guardia was hardly an orthodox Republican. He also ran as the nominee of the American Labor Party, a union-dominated anti-Tammany grouping that supported Franklin D. Roosevelt for President beginning in 1936. La Guardia supported Roosevelt, chairing the Independent Committee for Roosevelt and Wallace with United States Senator George Norris during the 1940 presidential election.

La Guardia was the city's first Italian-American mayor, but was not a typical Italian New Yorker. He was a Republican Episcopalian who had grown up in Arizona, and had an Istrian Jewish mother and a Roman Catholic-turned-atheist Italian father. He reportedly spoke seven languages, including Hebrew, Croatian, German, Hungarian, Italian, and Yiddish.

La Guardia's fans credit him for, among other things, restoring the economic lifeblood of New York City during and after the Great Depression. This was based on the theory that massive public works programs administered by his Parks Commissioner Robert Moses employed thousands of unemployed New Yorkers, and that his constant lobbying for federal government funds allowed New York to develop its economic infrastructure. Critics charged that the money was merely taken from others to spend on these projects, and that as the economy shrunk correspondingly in the sectors from which the money was taken, there was no net gain to the economy[13] . He is remembered for reading the newspaper comics on WNYC radio during a 1945 newspaper strike, and pushing to have a commercial airport (Floyd Bennett Field, and later LaGuardia Airport) within city limits. Responding to popular disdain for the sometimes corrupt City Council, La Guardia successfully proposed a reformed 1938 City Charter that created a powerful new New York City Board of Estimate, similar to a corporate board of directors.

He was an outspoken and early critic of Adolf Hitler and the Nazi regime. In a public address in 1934, La Guardia warned, "Part of Hitler's program is the complete annihilation of the Jews in Germany." In 1937, speaking before the Women's Division of the American Jewish Congress, La Guardia called for the creation of a special pavilion at the upcoming New York World's Fair "a chamber of horrors" for "that brown-shirted fanatic". La Guardia's sister, Gemma La Guardia Gluck, was arrested by the Germans in a roundup of Jews in Hungary in 1944. She was held under privileged conditions at Ravensbrück concentration camp and released after the war.

In 1940, one of the many interns serving in city government was David Rockefeller, who became his secretary for eighteen months in a "dollar a year" public service position. Although La Guardia took pains to point out that Rockefeller was only one of 60 interns, Rockefeller's working space was the vacant office of the deputy mayor.

In 1941, during the run-up to American involvement in World War II, President Roosevelt appointed La Guardia as the director of the new Office of Civilian Defense (OCD). The OCD was responsible for preparing for the protection of the civilian population in case America was attacked. It was also responsible for the maintenance of public morale, promoting volunteer service, and co-ordination with other federal departments to ensure they were serving the needs of a country in war. La Guardia remained Mayor of New York during this appointment, but after the attack on Pearl Harbor in 1941 he was succeeded at the OCD by a full-time director, James M. Landis.

According to Try and Stop Me by Bennett Cerf, La Guardia often officiated in municipal court. He handled routine misdemeanor cases, including, as Cerf wrote, a man who had stolen a loaf of bread for his starving family. La Guardia insisted on levying the fine of ten dollars. Then he said "I'm fining everyone in this courtroom fifty cents for living in a city where a man has to steal bread in order to eat!" He passed a hat and gave the fines to the defendant, who left the court with $47.50.