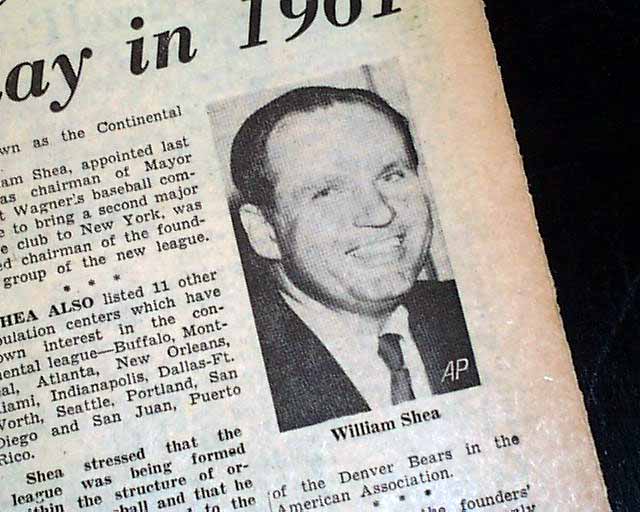 This 32 page newspaper has a four column headline on page 25: "3rd Big League Set Up; Will Begin Play in 1961" with photo of William Shea. (see)

Tells of the announcement of the Continental League to join Major League baseball which ended up never happening. It did however influence the current leagues to add more teams in the coming future.

Other news of the day throughout. Some small binding holes along the spine, otherwise in good condition.

wikipedia notes: The Continental League (or formally the Continental League of Professional Baseball Clubs) was a proposed third major league for baseball, announced in 1959 and scheduled to begin play in the 1961 season. Unlike predecessor competitors such as the Players League and the Federal League, it sought membership within organized baseball's existing organization and acceptance within Major League Baseball. The league disbanded in August 1960 without playing a single game, but it helped to accelerate the expansion of Major League Baseball.

The Continental League was the idea of New York City attorney William Shea, proposed in November 1958, a year after the New York Giants and Brooklyn Dodgers had moved to California. On July 27, 1959, the new league was formally announced, with teams in Denver, Houston, Minneapolis-St. Paul, New York City, and Toronto. The name of the league was said to have been the suggestion of Colorado senator Edwin C. Johnson.