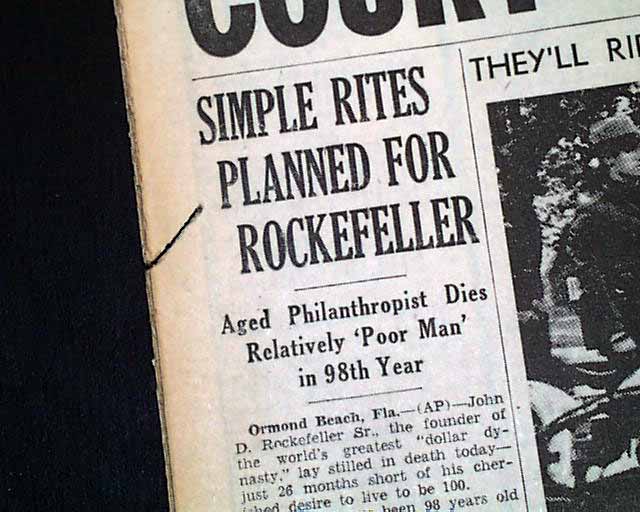 This 26 page newspaper has one column headlines on the front page: "Simple Rites Planned for Rockefeller," "Aged Philanthropist Dies Relatively Poor Man in 98th Year," with much more on pages 2 & 9 with related photos.

Other news of the day throughout. Usual browning with little margin wear, otherwise in good condition.

source: wikipedia: John Davison Rockefeller, Sr. (July 8, 1839 –May 23, 1937) was an American industrialist and philanthropist. Rockefeller revolutionized the petroleum industry and defined the structure of modern philanthropy. In 1870, Rockefeller founded the Standard Oil Company and ran it until he retired in the late 1890s. Standard Oil began as an Ohio partnership formed by John Davison Rockefeller, his brother William Rockefeller, Henry Flagler, chemist Samuel Andrews, and a silent partner Stephen V. Harkness. Rockefeller kept his stock and as gasoline grew in importance, his wealth soared and he became the world's richest man and first U.S. dollar billionaire, and is often regarded as the richest person in history.[1][2][3][4] Standard Oil was convicted in Federal Court of monopolistic practices and broken up in 1911. Rockefeller spent the last 40 years of his life in retirement. His fortune was mainly used to create the modern systematic approach of targeted philanthropy with foundations that had a major effect on medicine, education, and scientific research. His foundations pioneered the development of medical research, and were instrumental in the eradication of hookworm and yellow fever. He is also the founder of both University of Chicago and Rockefeller University. He was a devoted Northern Baptist and supported many church-based institutions throughout his life. Rockefeller adhered to total abstinence from alcohol and tobacco throughout his life.

He married Laura Celestia ("Cettie") Spelman in 1864 and outlived her. The Rockefellers had four daughters and one son; John D. Rockefeller, Jr. "Junior" was largely entrusted with the supervision of the foundations.