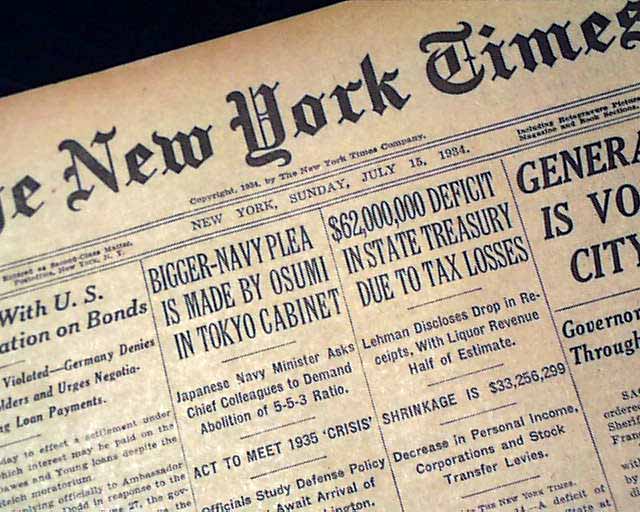 This 40+ page newspaper has one column headlines on the front page of the sport's section that include: "TIGERS HALT YANKS TO REGAIN THE LEAD" "Ruth Hits 701st Homer" and more with smaller subheads that include: "Painful Ordeal For Gehrig"

Tells of Lou Gehrig barely being able to start the game at bat to keep his streak going. He had severe lower back pain which some speculate could have been the first symptoms of his career ending disease.

Nice to have in this famous NYC title.

wikipedia notes: On July 13, 1934, Gehrig suffered a "lumbago attack" and had to be assisted off the field. In the next day's away game, he was listed in the lineup as "shortstop", batting lead-off. In his first and only plate appearance, he singled and was promptly replaced by a pinch runner to rest his throbbing back, never taking the field. A&E's Biography speculated that this illness, which he also described as "a cold in his back", might have been the first symptom of his debilitating disease.