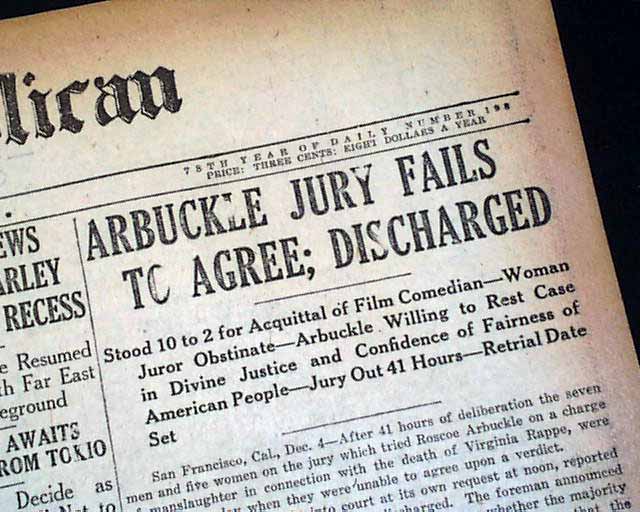 This 16 page newspaper has two column headlines on the front page that include: "ARBUCKLE JURY FAILS TO AGREE; DISCHARGED" and more. (see)

Tells of the hung jury causing a mistrial in the 1st trial of the Fatty Arbuckle murder case.

wikipedia notes: Arbuckle was then arrested on the charges of manslaughter but freed himself on bail. The first trial began on November 14, 1921. At the beginning of the trial Arbuckle told his already-estranged wife, Minta Durfee, that he did not harm Rappe; she believed him and appeared regularly in the courtroom to support him. Public feeling was so negative that she was later shot at while entering the courthouse.

San Francisco District Attorney Matthew Brady served as the prosecutor. Brady's first witnesses during the trial included Betty Campbell, a model, who attended the September 5 party and testified that she saw Arbuckle with a smile on his face hours after the alleged rape occurred, Grace Hultson, a local nurse who testified it was very likely that Arbuckle did rape Rappe and bruise her body in the process, and Dr Edward Heinrich, a local criminologist who claimed he found Arbuckle's fingerprints smeared with Rappe's blood on room 1219's bathroom door. Dr Arthur Beardslee, the hotel doctor, testified that an external force seemed to have damaged the bladder. Betty Campbell, however, would also reveal that Brady threatened to charge her with perjury if she did not testify against Arbuckle. Heinrich's claim to have found fingerprints was cast into doubt after Arbuckle's defense attorney, Gavin McNabb, produced the St. Francis hotel maid, who testified that she had cleaned the room before the investigation even took place. Dr Beardslee admitted that Rappe had never mentioned being assaulted while he was treating her. McNabb was furthermore able to get nurse Hultson to admit that the rupture of Rappe's bladder could have very well been as a result of cancer, and that the bruises on her body could have also been as a result of the heavy jewelry she was wearing that evening. The pathology experts testified that while the bladder had ruptured there was evidence of chronic inflammation and no evidence of any pathological changes preceding the rupture, in other words there was no external cause for the rupture. The court's spectators reportedly booed the prosecution during the trial, and stood and cheered for Arbuckle after he testified.

Taking the witness stand, Arbuckle was simple, direct, and unflustered in both direct and cross examination. In his testimony, Arbuckle claimed that Rappe, whom he testified he had known for five or six years, came into the party room around midnight, and that some time afterward Mae Taub (daughter-in-law of Billy Sunday) asked him for a ride into town so he went to his room (1219) to change his clothes and discovered Rappe vomiting in the toilet. Arbuckle then claimed she told him she felt ill and asked to lie down, and that he carried her into the bedroom and asked a few of the party guests to help treat her. To calm Rappe down they placed her in a tub of cool water. Arbuckle and Fischbach then took her to room 1227 and called the hotel manager and doctor. After the doctor declared Rappe was just drunk, Arbuckle then drove Taub to town. The prosecution then presented Rappe's bladder as evidence that Rappe had an illness. Arbuckle denied he had any knowledge of Rappe's illness. The prosecution then noted that Arbuckle refused to call a doctor, and argued that he refused to do so because he knew of Rappe's illness and saw a perfect opportunity to kill her. On December 4, 1921, the jury returned deadlocked after 44 straight hours of deliberation with a deadlocked 10–2 not guilty verdict, and a mistrial was declared.