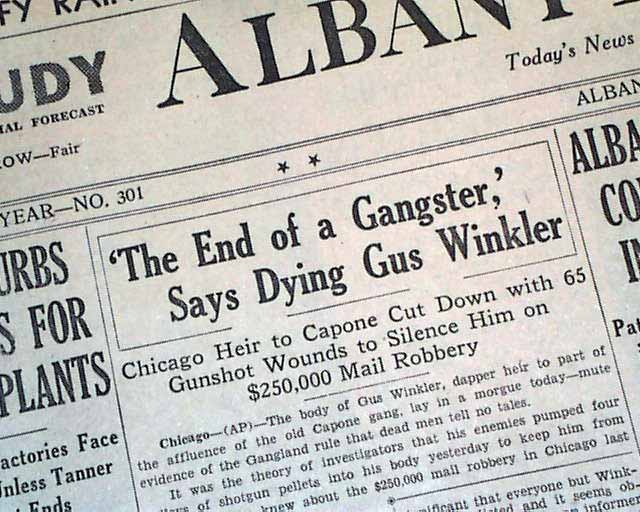 This 22 page newspaper has two column headlines on the front page: "'The End of a Gangster,' Says Dying Gus Winkler" "Chicago Heir to Capone Cut Down with 65 Gunshot Wounds to Silence Him on $250,000 Mail Robbery"

Tells of the assassination of Chicago mobster Gus Winkler.

Other news of the day. Light browning with little margin wear (mainly the spine) with little unrelated text loss, otherwise in good condition.

wikipedia notes: Gus Winkler (March 28, 1901–October 9, 1933) was a St. Louis mobster who, with Fred “Killer” Burke, was head of a criminal gang specializing in armed robbery and murder for hire.

Born August Henry Winkeler in St. Louis, Missouri, Winkler was a member of Cuckoo Gang during his teenage years. After a stint as an Army ambulance driver in World War I, Winkler joined up with the Egan's Rats gang before moving to Detroit in the mid-1920s. Working with the Purple Gang until mid-1927, he and Burke were hired out for freelance work from Al Capone and the Chicago Outfit (circumstantial evidence points to Winkler who, along with Burke, Bob Carey and Fred Goetz, may have been some of the gunmen involved in the St. Valentine's Day Massacre) as well as beginning a national crime spree holding up banks, armored cars, and mail trucks from New York to Los Angeles.

Winkler and Burke's organization broke up during the fallout from the Valentine's Day massacre, and Winkler was suspected of planning and later taking part in the robbery of US$2 million from a bank in Lincoln, Nebraska in September 1930. Soon enough, Gus was able to carve out a lucrative position in the rackets of Chicago's North Side, despite his cooperation with authorities.

Upon Capone's 1931 imprisonment, Winkler was surrounded by gangsters who he didn't trust, particularly Frank Nitti, who had always been resentful at how close Gus had been to Capone.

While entering the beer distribution office of Charles Weber, at 1414 Roscoe Street, on October 9, 1933, Winkler was shot six times and killed by unknown assailants armed with shotguns and died a half-an-hour later after arriving at a local hospital.