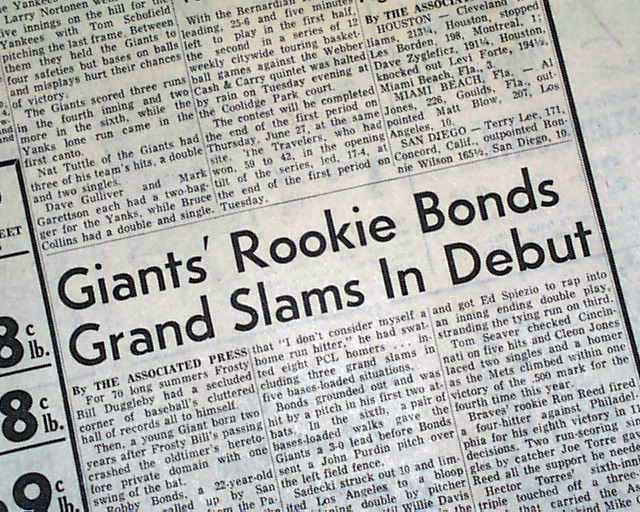 Tells of Bobby Bonds becoming the first player in modern baseball history to hit a grand slam home run in his MLB debut.

wikipedia notes: Bobby Lee Bonds (March 15, 1946–August 23, 2003) was an American right fielder in Major League Baseball from 1968 to 1981, primarily with the San Francisco Giants. Noted for his outstanding combination of power hitting and speed, he was the first player to have more than two seasons of 30 home runs and 30 stolen bases, doing so a record five times (the record was matched only by his son Barry), and was the first to accomplish the feat in both major leagues; he became the second player to hit 300 career home runs and steal 300 bases, joining Willie Mays. Together with Barry, he is part of baseball's most accomplished father-son combination, holding the record for combined home runs, RBIs, and stolen bases. A dangerous leadoff hitter, he also set major league records for most times leading off a game with a home run in a career (35) and a season (11, in 1973); both records have since been broken. He batted and threw right-handed.