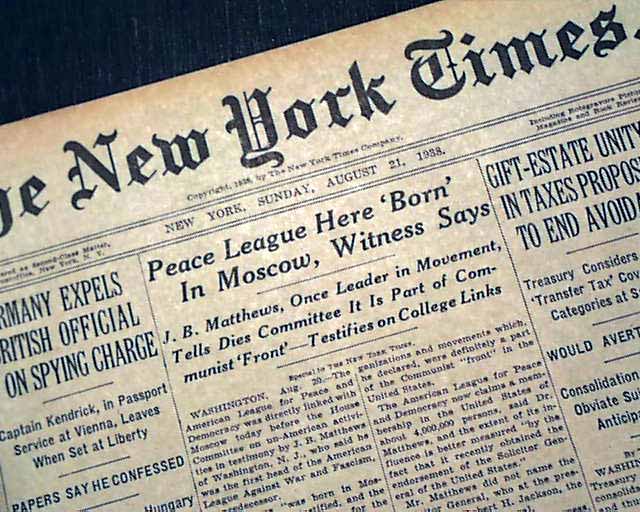 Lou Gehrig holds the all time MLB record for the most grand slam home runs with 23. This was his last one hit. Great to have in the famous NYC title.

wikipedia notes: Henry Louis "Lou" Gehrig (June 19, 1903 – June 2, 1941) was an American baseball player in the 1920s and 1930s, chiefly remembered for his prowess as a hitter, the longevity of his consecutive games played record and the pathos of his tearful farewell from baseball at age 36, when he was stricken with a fatal disease. Popularly called "The Iron Horse" for his durability, Gehrig set several Major League records.[1] His record for most career grand slams (23) still stands as of 2009. In 1969, Gehrig was voted the greatest first baseman of all time by the Baseball Writers' Association. Gehrig was the leading vote-getter on the Major League Baseball All-Century Team, chosen by fans in 1999.

A native of New York City, he played for the New York Yankees until his career was cut short by amyotrophic lateral sclerosis (ALS), now commonly referred to in the United States and Canada as Lou Gehrig's disease. Over a 15-season span between 1925 and 1939, he played in 2,130 consecutive games. The streak ended when Gehrig became disabled with the fatal neuromuscular disease that claimed his life two years later. His streak, long believed to be one of baseball's few unbreakable records, stood for 56 years until finally broken by Cal Ripken, Jr., of the Baltimore Orioles on September 6, 1995.

Gehrig accumulated 1,995 runs batted in (RBI) in seventeen seasons with a lifetime batting average of .340, a lifetime on-base percentage of .447, and a lifetime slugging percentage of .632. Three of the top six RBI seasons in baseball history belong to Gehrig. He was selected to each of the first seven All-Star games (though he did not play in the 1939 game, as he retired one week before it was held), and he won the American League's Most Valuable Player award in 1927 and 1936. He was also a Triple Crown winner in 1934, leading the American League in batting average, home runs, and RBIs.