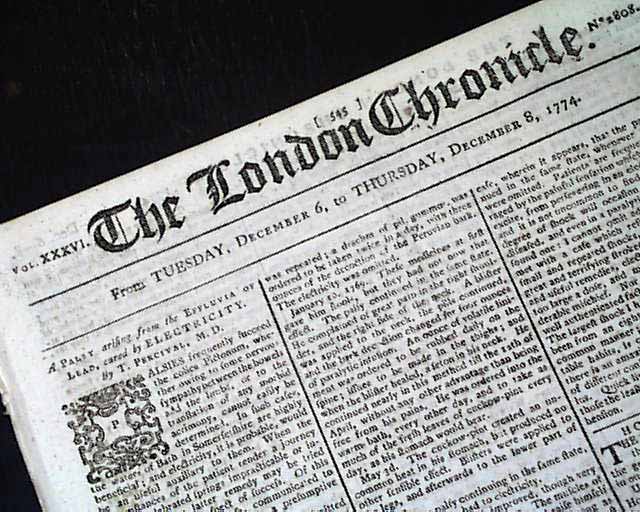 
THE LONDON CHRONICLE, England, December 8, 1774  The ftpg. includes some reports from the: "House of Commons" with American mention, including: "...his Lordship introduced several pertinent observations on the present spirit of the Colonists, their resolves, meetings, and in particular their intended non-importation agreement..." (see photos).
An inside pg. has most of the first column taken up with a letter signed: "A Manufacturer" which begins: "Our commerce to America was held out at the repeal of the Stamp act as the source of our wealth, etc....From this misrepresentation of facts the Colonists & their emissaries triumphed..." with much more, including: "Colonizing can be justified upon no other principle than as it may in future add to the wealth & power of the State If a new settlement is peopled from the Mother Country the latter becomes the weaker by the loss of the emigrants & its finances are reduced in proportion to the number who emigrate if not taxed in their new state..." with more (see photos).
Yet another report begins: "I must begin this letter with declaring that I am not an American that I have not, nor ever had have any connection with America...I will not enter into the question of the right of taxation of America by Great Britain..." with much more (see photos).
Eight pages, red ink tax stamp on page two, 8 1/2 by 11 inches, very nice condition.