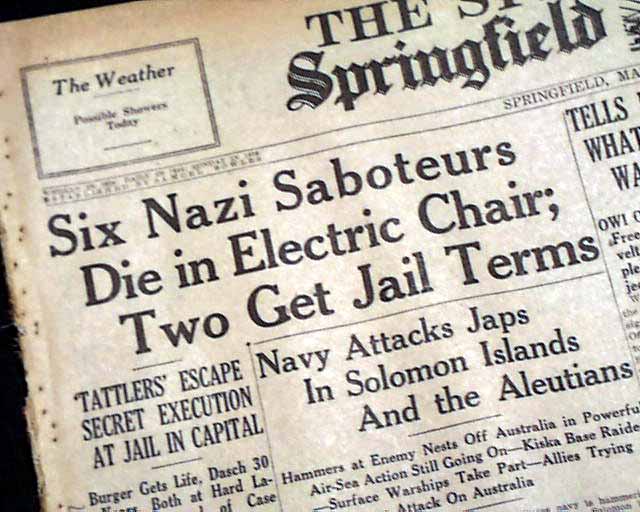 This 30+ page newspaper has a three column headline on the front page: "Six Nazi Saboteurs Die in Electric Chair; Two Get Jail Terms" with subheads. (see)

Other news of the day with much on World War II. Light browning, otherwise in good condition.

All were born in Germany and all had lived in the United States. All returned to Germany between 1933 and 1941. After the declaration of war between the United States and the German Reich, they received training at a sabotage school near Berlin, where they were instructed in the use of explosives and in methods of secret writing.

Burger, Dasch, Heinck and Quirin traveled from occupied France by German submarine U-202 to Amagansett Beach, Long Island, New York, landing in the hours of darkness, on or about June 13, 1942. The remaining four boarded German submarine U-584 which carried them from France to Ponte Vedra Beach, Florida. On or about June 17, 1942, they came ashore during the hours of darkness. All eight wore full or partial German uniforms, to ensure treatment as prisoners of war should they be captured on landing. The Long Island group was noticed by Coast Guard beach patrolman Frank Cullen, whom Dasch attempted to bribe with $260. Cullen returned to his station and sounded the alarm. The two groups promptly disposed of uniforms and proceeded in civilian dress to New York City and Jacksonville, Florida, respectively, and from there to other points in the United States. All had received instructions in Germany from an officer of the German High Command to destroy war industries and war facilities in the United States, for which they or their relatives in Germany were to receive salary payments from the German Government.

Upon landing, Dasch and Burger turned themselves in to the Federal Bureau of Investigation with some difficulty, since the FBI did not believe them immediately. They convinced the FBI that they were telling the truth and the remaining six were taken into custody in New York and Chicago, Illinois by FBI agents. The FBI had no leads until Dasch gave his exaggerated and romanticized version in Washington DC.

President Franklin D. Roosevelt convened a secret military tribunal on July 2, 1942 which sentenced the eight men to death.[1] The President later commuted the death sentences of Dasch and Burger to life in prison, as they had both confessed and assisted in capturing the others. Indeed, it was Dasch who approached the FBI, offering to turn the men in, which he then did. Burger was part of the plot to turn on the others and cooperated with the FBI extensively. Though all the men confessed, and gave full statements, the remaining six were executed by electrocution on August 8, 1942 in Washington, D.C. Dasch and Burger were released from prison in 1948 and deported to Germany. Dasch spent the remaining years of his life trying to return to the U.S. One time, a visa application was sent to J. Edgar Hoover by the State Department on Dasch's behalf. Hoover stated that the idea of giving Dasch a visa was "outrageous" and promptly denied it.