Home > Back to Search Results > Battle of Cambrai 1918...
Click image to enlarge 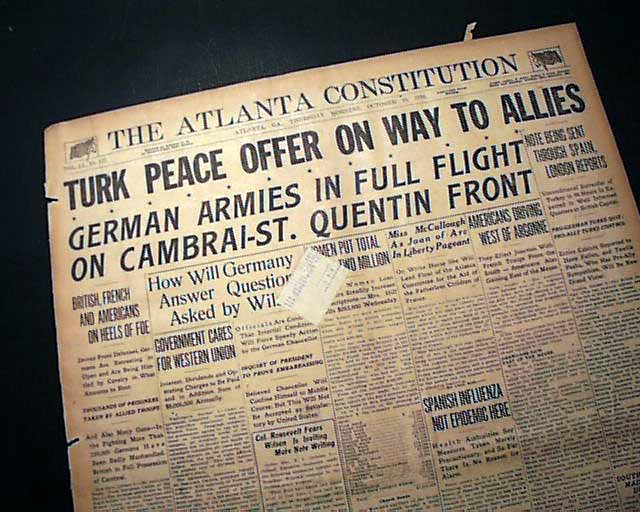 This 16 page newspaper has a six column headline on the front page: "GERMAN ARMIES IN FULL FLIGHT ON CAMBRAI-ST. QUENTIN FRONT" with subheads. (see)

Other news of the day with much on World War I. Usual browning with minor margin wear and small library on the front page (see), otherwise in good condition. Should be handled with care.

wikipedia notes: The Battle of Cambrai was a battle between troops of the British First, Third and Fourth Armies and German Empire forces during the Hundred Days Offensive of World War I. The battle took place in and around the French city of Cambrai, between 8 October and 10 October 1918. The battle incorporated many of the newer tactics of 1918, in particular tanks, meaning that the attack was an overwhelming success with light casualties in an extremely short amount of time.

Although there were three German lines, spanning some 7,000 yards, the sector had been quiet for some time so it was lightly garrisoned: the 20th Landwehr and the 54th Reserve, supported by no more than 150 guns. The German defenders were unprepared for the "hurricane bombardment" by 324 tanks.

On October 8, the 2nd Canadian Division entered Cambrai and encountered sporadic and light resistance. However, they rapidly pressed northward, leaving the "mopping up" of the town to the 3rd Canadian Division following close behind. When the 3rd entered the town on October 10, they found it deserted. Fewer than 20 casualties had been taken.