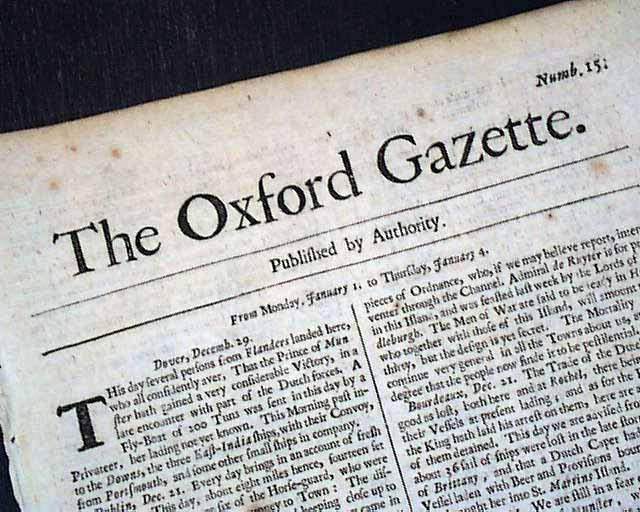 
THE OXFORD GAZETTE, England, January 4, 1665 (1666 by today's calendar).  This is an extremely famous--and rare--title, being the predecessor of the famous "London Gazette", the oldest continually published newspaper in the world. Because of the Plague at this time, the Royal Court had removed itself from London to Oxford when this newspaper began, so issues #1 thru #23 were published in Oxford (actually published simultaneously in London & Oxford), and when the contagion had subsided & the Court returned to London this newspaper went with it and renamed itself "The London Gazette" with issue #24, and the rest is history.
This is issue number 15. The front page has much mention of Admiral du Ruyter, the most famous naval figure in Dutch history (see photos).The balance of the front page, and much of the back page, is taken up with various military reports from Europe, including much concerning the Dutch (see).
The back page also has mention that: "...17 prisoners from Newgate, who were aboard a Barbadoes ship, got off...went ashore...master of the ship made pursuit after them...".
Of great significance is the note at the bottom of the back page which gives the week's tally of deaths. Keeping in mind that the Great Plague was ravaging England at this time, this brief report is a contemporary report of such deaths, reading: "The Account of the Weekly Bill at London runs this, Total 253. Plague 70. Decreas'd 77." It is always great to have period mention of the Great Plague.
This issue measures about 7 1/4 by 11 inches, is printed slightly askew on the paper (common) but no print runs off the paper (see). Ample margin in most of the issue.
An exceedingly scarce newspaper and a cornerstone issue for any early newspaper collection, being among the first few issues of the world's oldest continually published newspaper--and from the very brief period when it published in Oxford.