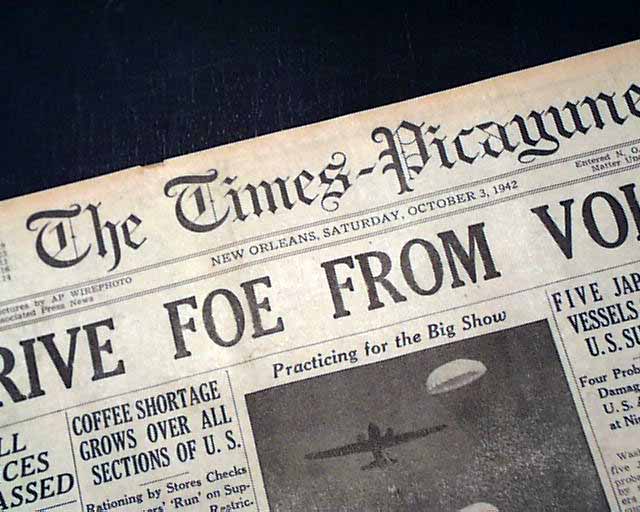 This 24 page newspaper has a one column headline on page 10: "Robinson Beats La Motta Easily in 10-Round Go"

This was the first fight before the famous defeat of Robinson by Lamotta.

Other news of the day. Light browning with minor spine wear, otherwise good.

wikipedia notes: In 1942, Robinson knocked out Zivic in the tenth round in a January rematch. The knockout loss was only the second of Zivic's career in more than 150 fights. Robinson knocked him down in the ninth and tenth rounds before the referee stopped the fight. Zivic and his corner protested the stoppage; James P. Dawson of The New York Times stated, however, that "[t]hey were criticizing a humane act. The battle had been a slaughter, for want of a more delicate word." Robinson then won four consecutive bouts by knockout, before defeating Servo in a controversial split decision in their May rematch. After winning three more fights, Robinson faced Jake LaMotta, who would become one of his more prominent rivals, for the first time in October. He defeated LaMotta via unanimous decision. Robinson weighed 145 lb (66 kg) compared to 157.5 for LaMotta, but he was able to control the fight from the outside the entire bout, and actually landed the harder punches during the fight. Robinson then won four more fights, including two against Izzy Jannazzo, from October 19 to December 14. For his performances, Robinson was named "Fighter of the Year". He finished 1942 with a total of 14 wins and no losses.