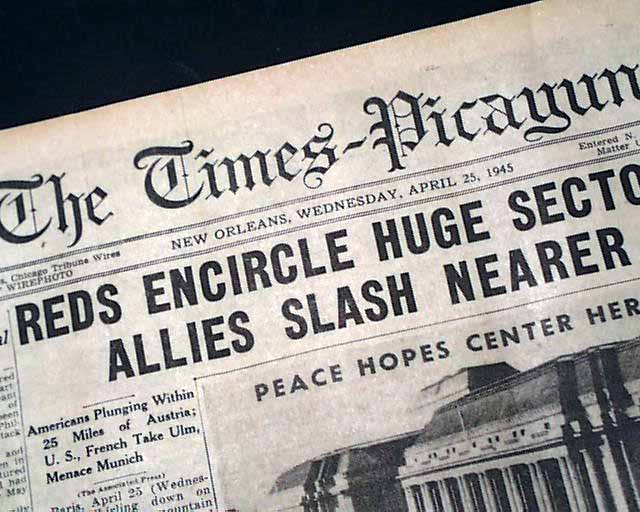 Other news of the day. Light browning with little front page wear and minor margin wear, otherwise in good condition.

wikipedia notes: Albert Benjamin "Happy" Chandler, Sr. (July 14, 1898 – June 15, 1991) was the 44th and 49th Governor of Kentucky, a U.S. Senator, the second Commissioner of Major League Baseball, and a member of the Baseball Hall of Fame. His jovial attitude earned him the nickname "Happy," which stuck for the remainder of his life.

Chandler's first term as governor is still regarded as one of the most productive of any Kentucky governor. Following on this success, he unsuccessfully tried to unseat Senate Majority Leader and fellow Kentuckian Alben Barkley, but was appointed to the Senate shortly after the election due to the death of the state's junior senator. He would later resign this position to become Commissioner of Baseball, steering it through the difficult period of integration, which many contend led to his not being offered a second contract for the position. Instead, twenty years after his first term as governor of Kentucky, Chandler returned to the Governor's Mansion using the slogan "Be Like Your Pappy and Vote For Happy."

Later in life, Chandler's commitment to civil rights was questioned as he supported Dixiecrat Strom Thurmond's bid for President. Having been elected to his first term at the age of 37, Kentucky's "Boy Governor" was both the last surviving governor of any U.S. state to serve before 1939 and the last living Senator to have served before 1940 by the time of his death in 1991.