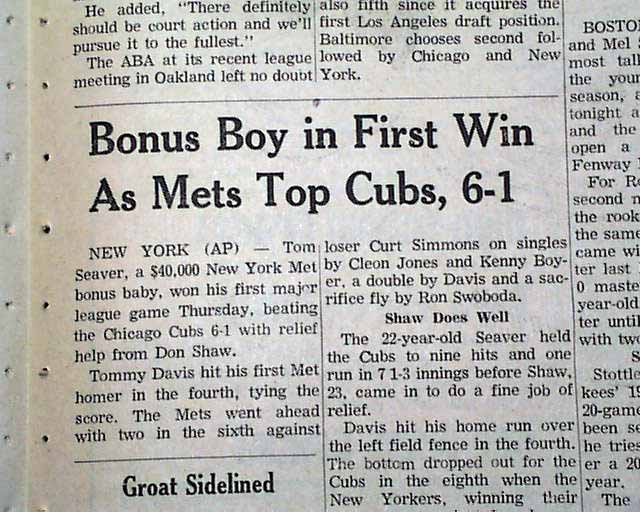 This 50 page newspaper has a two column headline near the bottom of page 39 that reads: "Bonus Boy in First Win As Mets Top Cubs, 6-1" with box scores. Tells of the very 1st win for New York Mets great Tom Seaver. See photos for text.

Also on page 40 is a 3 column headline that reads: "Clay Will Not Go Into Army 'Under Any Circumstances'" which what lead to him changing his name to Muhammud Ali.

Two key reports in one issue here. Other news of the day throughout. Good condition.

wikipedia notes: George Thomas Seaver (born November 17, 1944) is a former right-handed Major League Baseball pitcher who broke into the major leagues in 1967 and retired in 1987. He played for four different teams in his career, but is remembered primarily for his time with the New York Mets. Nicknamed "Tom Terrific" and "The Franchise", Seaver had 311 wins, 3,640 strikeouts and a 2.86 earned run average during a 20-year career. In 1992, he was inducted into the National Baseball Hall of Fame by the highest percentage ever (98.8%), and currently has the only plaque at Cooperstown wearing a New York Mets hat.

He won the National League Rookie of the Year Award in 1967, and three NL Cy Young Awards as the league's best pitcher. As the Mets' all-time leader in wins, Seaver is considered the greatest player in New York Mets history, as well as one of the best starting pitchers in the history of baseball.

Seaver spent one season with the Jacksonville Suns of the International League, then joined New York in 1967. He won 16 games for the last-place Mets, with 18 complete games, 170 strikeouts, and a 2.76 ERA, all Mets records to that point, and was named the National League Rookie of the Year. He was also named to the 1967 All-Star Game, and got the save by pitching a scoreless 15th inning. In 1968, he won 16 games again, and recorded over 200 strikeouts for the first of nine consecutive seasons, but the Mets moved up only one spot in the standings, to ninth.