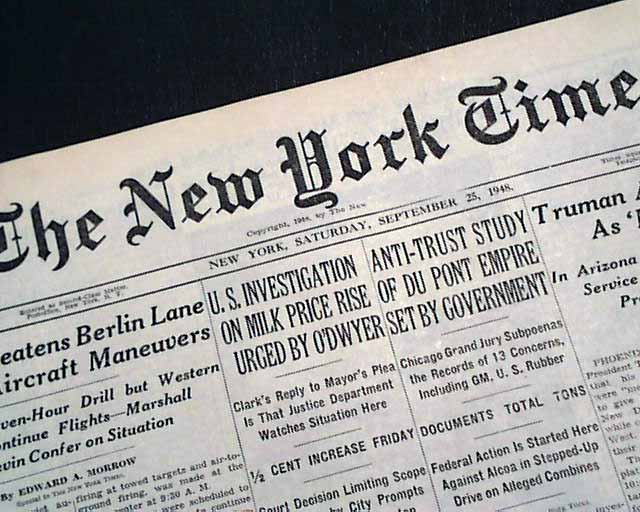 This 32 page newspaper has small one column headlines on page 8: "TRIAL OF 'AXIS SALLY' SET" "Court Names Nov. 15--Accused Would Have Truman Appear"

Tells of the decision to go to trial as Mildred Gillars pleads not guilty for treason.

Born Mildred Elizabeth Sisk in Portland, Maine, she took the name Mildred Gillars as a small child after her mother remarried. Gillars studied drama at Ohio Wesleyan University, but dropped out before graduating. Afterwards she moved to New York City, where she dreamed of becoming an actress but met with little success. In the 1930s, she went to Dresden to study music and later worked as an English instructor at the Berlitz School of Languages in Berlin. In 1940, she accepted a job as an announcer and actress with Radio Berlin, where she remained until the Nazis fell in 1945.

Gillars was a well-known propagandist to Allied troops. A favorite theme of her broadcasts was the infidelity of soldiers' wives and sweethearts. She played American songs and typically peppered her broadcasts with antisemitic rhetoric and bitter attacks on Franklin D. Roosevelt. Gillars usually introduced herself as "Midge," but American troops nicknamed her "Axis Sally," "the Bitch of Berlin,""Olga," and "Berlin Bessie." However, Gillars was not the only Axis radio announcer known as "Sally." Rita Zucca, an announcer on the "Jerry's Front" program broadcast from Italy, called herself "Sally." Zucca's broadcasts are sometimes inaccurately attributed to Gillars.

Gillars made her most infamous broadcast on May 11, 1944, prior to the D-Day invasion of Normandy, France. It was a play called "Vision of Invasion," in which Gillars played an American mother who dreamed that her son had died a horrific death in the English Channel. An announcer intoned, "The D of D-Day stands for doom...disaster...death...defeat...Dunkerque or Dieppe."

Gillars' last broadcast was on May 6, 1945, just two days before the German surrender. After the war, Gillars blended into the large number of displaced persons in Allied-occupied Germany. She was captured and eventually flown back to the United States in 1948. She was charged with 10 counts of treason, although she was actually only tried for eight.

Prosecutors called Gillars' broadcasts subtle attempts to break down the morale of American soldiers. They introduced evidence that Gillars had signed an oath of allegiance to Hitler. They also claimed that she posed as a worker for the International Red Cross in order to record messages from American soldiers that could be converted into propaganda.

Gillars' defense attorneys argued that her broadcasts stated an unpopular opinion but did not rise to the level of treason. They also said that she was under the sway of her former romantic interest, Max Otto Koischwitz, a German national whom she had met at Hunter College in New York City.

The sensational, six-week trial ended on March 8, 1949. After long deliberations, the jury convicted Gillars on only one count of treason, for making the "Vision of Invasion" broadcast.

Gillars was sentenced to 10-to-30 years in prison. She got a much lighter sentence than two other Americans who made broadcasts for the Nazis, Robert Henry Best and Douglas Chandler. She became eligible for parole in 1959, but did not pursue it until two years later, and she was successful in receiving it. Gillars resided at a convent (Our Lady of Bethlehem) in Columbus, Ohio, and she later taught English and German at the prep school operated by a Catholic order near Columbus, Ohio. In 1973, she returned to Ohio Wesleyan University to earn a degree.

Whereas the best-known foreign broadcaster for Germany, William Joyce or "Lord Haw-Haw," was hanged by Britain for treason after the war, Mildred Gillars died of natural causes at the age of 87.