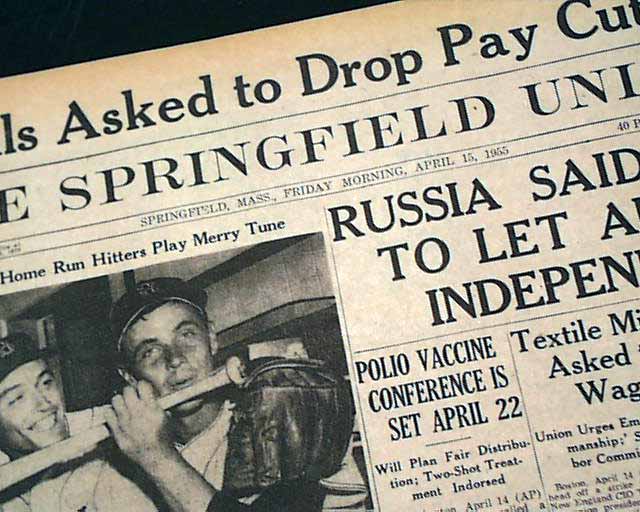 This 40 page newspaper has various baseball reports on the opening week of the 1955 season on pages 33 & 34.

Page 34 has historic one column headline that reads: "Howard First Negro To Play for Yanks In Regular Game" which tells of Elston Howard becoming the very first negro baseball player to start a game for the New York Yankees. See photo for text.

wikipedia notes: Elston Gene Howard (February 23, 1929 – December 14, 1980) was an American catcher, left fielder and coach in Negro League and Major League Baseball who played most of his career for the New York Yankees. The first African American player on the Yankees roster, he was named the American League's Most Valuable Player for the 1963 pennant winners after finishing third in the league in slugging average and fifth in home runs, becoming the first black player in AL history to win the honor. He won Gold Glove Awards in 1963 and 1964, in the latter season setting AL records for putouts and total chances in a season. His lifetime fielding percentage of .993 was a major league record from 1967 to 1973, and he retired among the AL career leaders in putouts (7th, 6,447) and total chances (9th, 6,977). One of the most regular World Series participants in history, he appeared in ten fall classics and ranks among Series career leaders in several categories. His lifetime slugging average of .427 ranked fourth among AL catchers at the time of his retirement.