Home > Back to Search Results > The burning of Norfolk...
Click image to enlarge 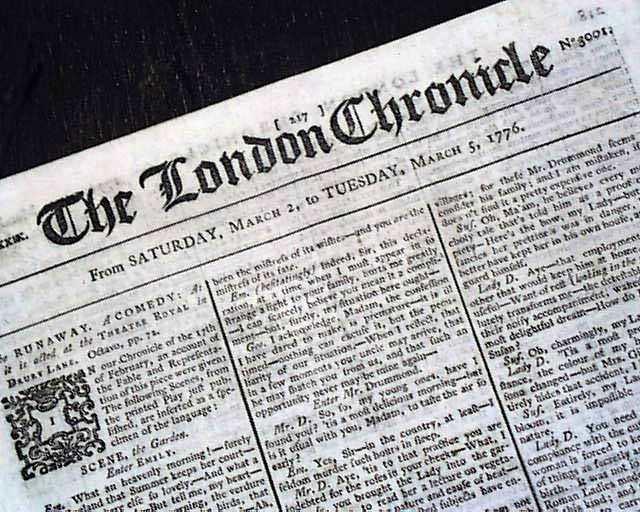 The burning of Norfolk...


THE LONDON CHRONICLE, England, March 5, 1776  A pg.2 item notes: "Letters...from Virginia mention that the town of Norfolk has been bombarded by the King's ships & a great part of it burnt down." Another pg. has much more on this with an: "Extract of a Letter from a Gentleman dated Ship William, Off Norfolk, Virginia, Dec. 25, 1775" which has some great content (see photos) bits including: "...large body of the rebel army being on their march to destroy Norfolk...was garrisoned with 25 men...the rebels approached & made several unsuccessful attacks but were always repulsed with loss...a part of the rebels had got over & proposed to attack the fort on both sides...By letters in town, of a later date, we learn Lord Dunmore had set fire to the towns of Norfolk and Portsmouth in Virginia..." and also: "...letter from an officer at New York...says 'We are here in the land of plenty, among many faithful subjects...Long Island are our friends almost to a man & the New Jersey Delegates have refused to attend the General Congress. I hope we shall soon have the pleasing news of the New England Rebels being left to shift for themselves." This same page has other war-related reports from America (see for portions). The bkpg. has even further reports on the Revolutionary War events at Norfolk (see). In very nice condition. Measures 8 1/2 by 11 in.