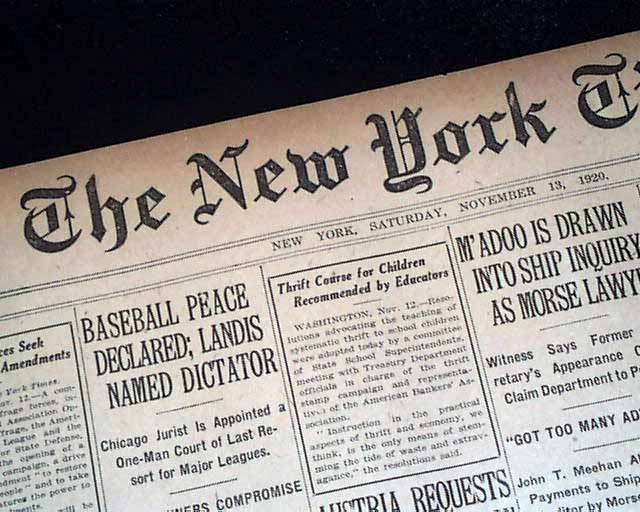 and more with smaller subheads. Tells of the very 1st MLB commissioner taking the reigns over the Major Leagues. The main reason for having a commissioner was the Chicago Black Sox World Series scandal of 1919. A historic report in baseball. Nice to have in this famous NYC title.

Other news of the day. Usual browning with little margin wear including a few small pieces missing in unrelated areas, otherwise good. Should be handled with care.

wikipedia notes: Kenesaw Mountain Landis (November 20, 1866–November 25, 1944) was an American jurist who served as a federal judge from 1905 to 1922, and subsequently as the first commissioner of organized baseball, including both the American and National leagues and the governing body of minor league baseball, the National Association of Professional Baseball Leagues.

While serving as a Federal judge, Landis, an ardent baseball fan, was selected as chairman of a new National Commission of baseball. The owners decided to appoint a commission made up entirely of non-baseball men to restore confidence in the sport following the 1919 Black Sox Scandal, perhaps the worst of a number of incidents that jeopardized the integrity of the game.

However, Landis declared that he would accept only an appointment as sole commissioner. He also demanded unlimited authority to act in the "best interests of baseball"--in essence, serving as an arbitrator whose decisions could not be appealed. The owners, still reeling from the perception that the sport was crooked, readily agreed.