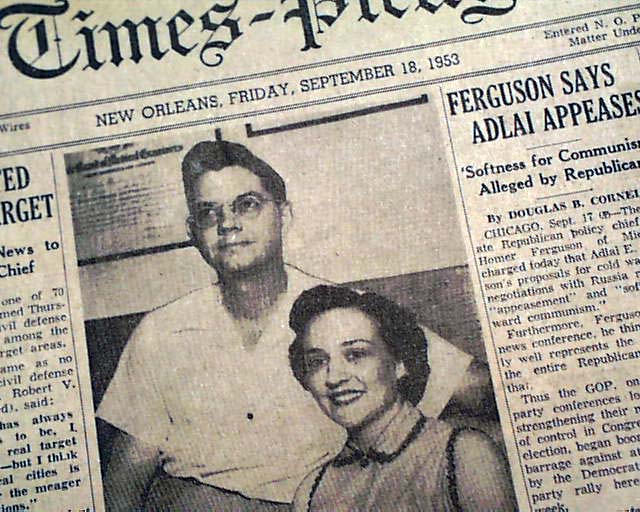 This 58 page newspaper has a two column headline on the front page: "Separated Twins' Chances for Survival Held 'Good'" with subhead: "Pair Is Unjoined in Two Hour, 15-Minute Surgery" and nice photo of the parents. (see)

wikipedia notes: Ashton Joseph Mouton, Sr. (October 16, 1916 - January 31, 1988), was a United States businessman and politician who became, at thirty-one, the youngest mayor in the history of Lafayette, Louisiana. A Democrat, Mouton was elected mayor in 1948. He served two four-year terms and left office in 1956. In 1963, Mouton was an unsuccessful contender for lieutenant governor on an intraparty ticket with the winning gubernatorial candidate, John Julian McKeithen of tiny Columbia, the seat of Caldwell Parish, in northeastern Louisiana.

Mouton was born in Lafayette (also Lafayette Parish) to Edwin Mouton, Sr., and the former Georgie McBride. He was educated at Mount Carmel Elementary School and Cathedral High School in Lafayette. In 1939, he obtained a degree in business administration from Southwestern Louisiana Institute, now the University of Louisiana at Lafayette. He married the former Stella Rose Dupuis, the daughter of Dr. and Mrs. J.W. Dupuis, Sr., of Youngsville in Lafayette Parish. They had five children: Stella Rose; Ashton J. Mouton, Jr. (born 1947); twins Catherine Anne and Carolyn Anne (born 1953); and John Mouton. The twins were remarkable in that they were the first pygopagus conjoined twins to be successfully separated.