Home > Back to Search Results > Cornwallis in the South... Congress on pay for the soldiers...
Click image to enlarge 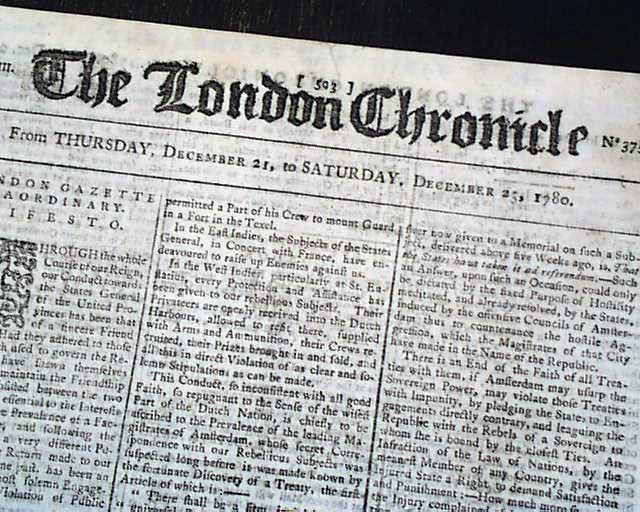 
THE LONDON CHRONICLE, England, December 23, 1780   Page 2 has various items on the Revolutionary War including a report from Charleston which notes: "...last accounts from Lord Cornwallis inform us that he was with the army in North Carolina, that the people submit to him in great number & that he meets with no opposition in his march...of the most notorious rebels in South Carolina...are daily soliciting Lord Cornwallis to be admitted to take the oaths of allegiance & again be considered as British subjects..." with more (see), followed by a letter from Boston, and then one from New York which includes: "...Next Spring will probably furnish a new scene in America; we then look for one of the most vigorous campaigns that has yet taken place in this quarter of the globe..." with a bit more (see).
Most of an inside page is taken up with: "American News" taken from the Boston Gazette, all being reports from Congress concerning the pay of soldiers and other items, all of which can be seen in the photos.
Eight pages, 8 1/2 by 11 inches, nice condition.