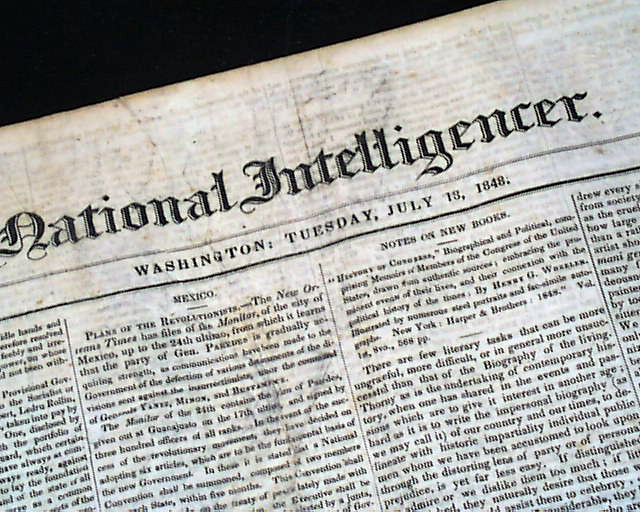 
NATIONAL INTELLIGENCER, Washington, D.C., July 18, 1848  This newspaper contains on page 3 reports from the "House of Representatives" and includes the results of a vote to suspend the rules concerning a resolution to allow a postal route bill to be disposed of, listing all those who voted "Yea" and "Nay". Within the "Yea" list is "Lincoln" (see photos), this being Abraham Lincoln when he was serving just two years as a Representative from Illinois.
In 1846 Lincoln ran for the United States House of Representatives and won. While in Washington he became known for his opposition to the Mexican War and to slavery. He served only one term, from March, 1847 through March, 1849, so Congressional reports with mention of Abraham Lincoln are quite scarce. Lincoln returned home after his term and resumed his law practice.
Quite rare to find period mentions of Lincoln--albeit quite inconspicuous--from long before he would become a national figure. Lincoln was just 39 years old at the time.
Also of interesting is a small report at the bottom of the front page: "It is reported that Kit Carson, celebrated as the guide and companion of Lieut. Col. Fremont in his dangerous explorations of the West, has bee killed on the plains by the Indians. ...The rumor was brought to Fort Independence by an Indian." This was untrue. He wouldn't die until 20 years later.
Complete in 4 pages, some dirtiness to a portion of the front page, nice condition.