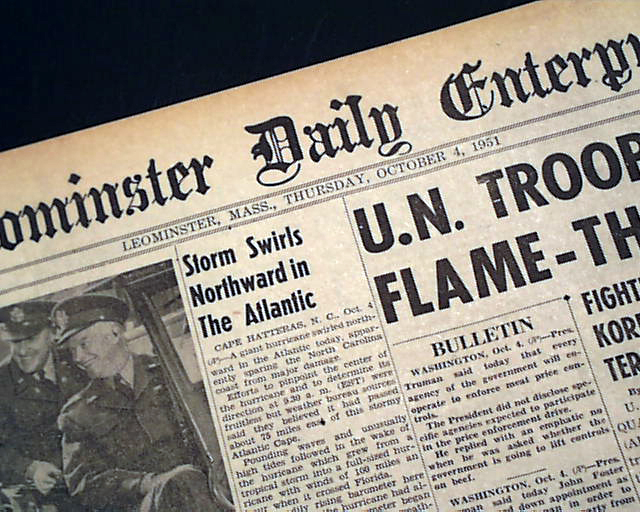 This 14 page newspaper has a one column headline on page 10: "Giants Ninth Will Be Talked Of for Years".
Tells of the very famous walk off home run by Bobby Thomson in the bottom of the ninth inning at the Polo Grounds to win the NL Pennant for the New York Giants.
Though not the best of headlines on this, it is still a first report on one the most famous sport's highlight of all time.
Other news of the day. Light browning with minor spine wear, otherwise in good condition.

wikipedia notes: In baseball, the "Shot Heard 'Round the World" is the term given to the walk-off home run hit by New York Giants outfielder Bobby Thomson off Brooklyn Dodgers pitcher Ralph Branca at the Polo Grounds to win the National League pennant at 3:58 p.m. EST on October 3, 1951. As a result of the "shot" (baseball slang for "home run" or any hard-hit ball), the Giants won the game 5–4, defeating the Dodgers in their pennant playoff series, two games to one. It is referred as one of the most famous episodes in Major League Baseball history, and possibly one of the greatest moments in sports history.

The phrase shot heard 'round the world is from a classic poem by Ralph Waldo Emerson, originally used to refer to the first clash of the American Revolutionary War and since used to apply to other dramatic moments, military and otherwise. In the case of Thomson's home run, it was particularly apt as U.S. servicemen fighting in the Korean War listened to the radio broadcast of the game.
Thomson's homer, and the Giants' victory after overcoming a double-digit lead in the standings by the Dodgers in the weeks preceding the playoff, are also sometimes known as the Miracle of Coogan's Bluff.