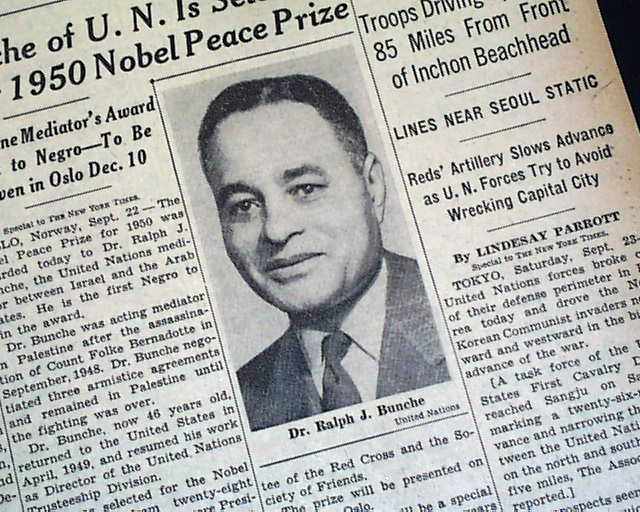 This 32 page newspaper has a two column headline on the front page: "Bunche of U.N. Is Selected For 1950 Nobel Peace Prize" with subhead: "Palestine Mediator's Award First to Negro...." with photo of Bunche.

Tells of the first negro to ever win the Nobel Peace Prize.

Other news of the day throughout. Light browning, otherwise in nic e condition.

wikipedia notes: Ralph Johnson Bunche (August 7, 1903[1] – December 9, 1971) was an American political scientist and diplomat who received the 1950 Nobel Peace Prize for his late 1940s mediation in Palestine. He was the first person of color to be so honored in the history of the Prize.[2] He was involved in formation and administration of the United Nations. In 1963, he received the Medal of Freedom from President John F. Kennedy.

Beginning in 1947, Bunche was involved with the Arab-Israeli conflict. He served as assistant to the United Nations Special Committee on Palestine, and thereafter as the principal secretary of the U.N. Palestine Commission. In 1948 he traveled to the Middle East as the chief aide to Sweden's Count Folke Bernadotte, who had been appointed by the U.N. to mediate the conflict. These men chose the island of Rhodes for their base and working headquarters. In September, Bernadotte was assassinated in Jerusalem by members of the underground Jewish group Lehi.

Following the assassination, Dr. Bunche became the U.N.'s chief mediator and chose to conduct all future negotiations on Rhodes. The representative for Israel was Moshe Dayan who reported in memoirs that much of his delicate negotiation with Ralph Bunche was conducted over a billiard table while shooting pool with him. Optimistically, Dr. Bunche commissioned a local potter to create unique memorial plates bearing the name of each negotiator. When the agreement was signed, Dr. Bunche awarded these gifts. After unwrapping his, Moshe Dayan asked Ralph Bunche what might have happened if no agreement had been reached. "I'd have broken the plates over your damn heads", Bunche answered. For achieving the 1949 Armistice Agreements, Dr. Bunche received the Peace Prize, in 1950. He continued to work for the United Nations, mediating in other strife-torn regions, including the Congo, Yemen, Kashmir, and Cyprus. He rose to the position of undersecretary-general in 1968.