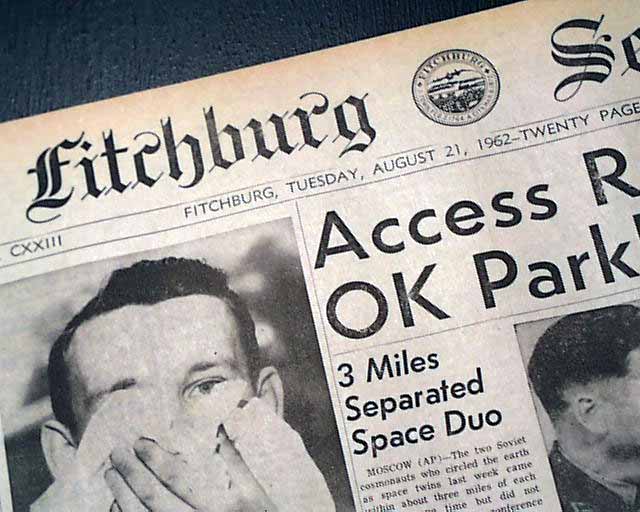 This 20 page newspaper has a two column headline on page 4: "Brandt To Ask West Aid Berliners At Wall".

Tells of the the tensions around the Berlin wall soon after the shooting death of 18 year old Peter Fechter. (is mentioned)

wikipedia notes: About one year after the construction of the wall, Fechter attempted to flee from the GDR (German Democratic Republic) together with his friend Helmut Kulbeik. The plan was to hide in a carpenter's workshop near the wall in Zimmerstrasse and, after observing the border guards from there, to jump out of a window into the so-called death-strip (a strip running between the main wall and a parallel fence which they had recently started to construct), run across it, and climb over the two metre (6.5 ft) wall topped with barbed wire into the Kreuzberg district of West Berlin near Checkpoint Charlie.

When both reached the wall, guards fired at them. Although Kulbeik succeeded in crossing the wall, Fechter, still on the wall, was shot in the pelvis in plain view of hundreds of witnesses. He fell back into the death-strip on the Eastern side, where he remained in view of Western onlookers, including journalists. Despite his screams, he received no medical assistance either from the East or the West side. He bled to death after about an hour. Hundreds in West Berlin formed a spontaneous demonstration, shouting "Murderers!" at the border guards.

The lack of medical assistance for Peter Fechter was attributed to mutual fear: western bystanders were apparently prevented at gunpoint from assisting him, although according to a report in TIME magazine, a U.S. second-lieutenant on the scene received specific orders from the US Commandant in West Berlin to stand firm and do nothing. It also emerged during the trial that any aid attempt from the West had indeed been made impossible, but according to a report from forensic pathologist Otto Prokop, "Fechter had no chance of survival. The shot in the right hip had caused severe internal injuries." Likewise the head of the GDR border platoon stated that he was afraid to intervene, because of an incident just three days earlier when a GDR soldier Rudi Arnstadt had probably been shot by a Western federal policeman. Nonetheless, the GDR border soldiers did retrieve Peter Fechter's dead body an hour after he had fallen.