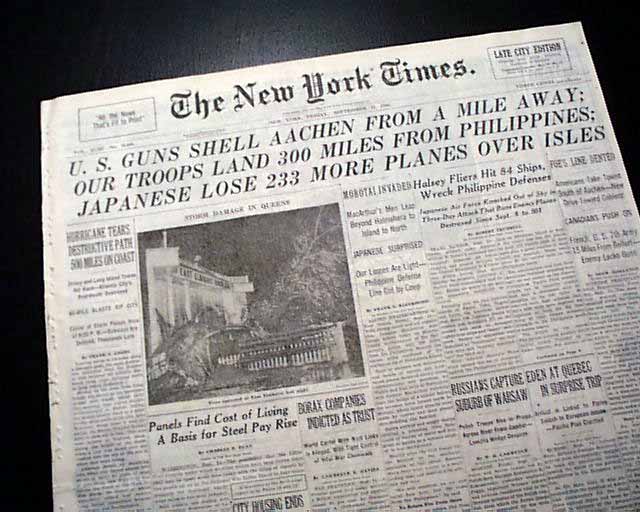 Tells of the Great Atlantic Hurricane of 1944.

Other news of the day throughout with much on World War II. Rag edition in nice condition.

wikipedia notes: The Great Atlantic Hurricane in 1944 was an intense Atlantic hurricane sometimes compared to the New England Hurricane of 1938.

A hurricane was first detected on September 9, northeast of the Lesser Antilles. It likely developed from a tropical wave several days before. It moved west-northwestward, and steadily intensified to a 140 mph (230 km/h) major hurricane on the 12th, northeast of the Bahamas. Around this time, the Miami Hurricane Warning Office designated this storm The Great Atlantic Hurricane to emphasize its intensity and size, which appears to be the first time a name was designated by the office which evolved into the National Hurricane Center. [1] The hurricane turned northward, where dry and cooler air was entrained into the circulation. It weakened to a Category 2 hurricane on the 14th as it recurved to the northwest, and hit the Outer Banks later that day.

Moving rapidly to the northeast, the hurricane maintained its strength somewhat at the time of its Long Island landfall on September 15, hitting as an 85 mph (137 km/h) hurricane. Shortly thereafter it crossed the Rhode Island coastline, and after emerging into the Massachusetts Bay it hit Maine, just before becoming extratropical. The non-tropical system continued northeastward, and merged with a larger extratropical low on the 16th south of Greenland.