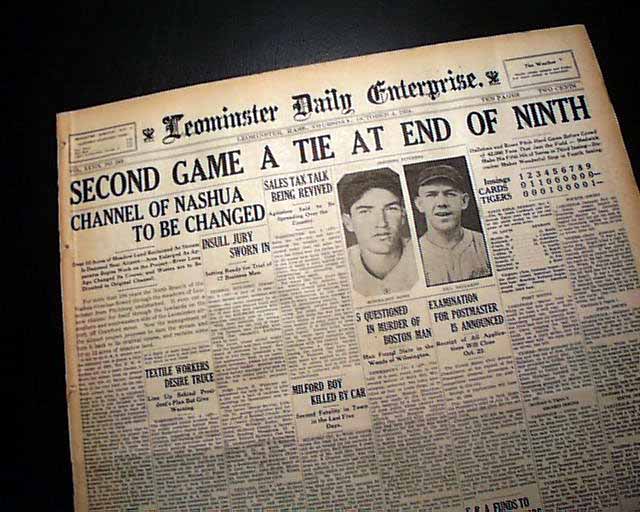 This 10 page newspaper has a nice banner headline on the front page: "SECOND GAME A TIE AT END OF NINTH" with subheads, two small photos and lineup. This edition was printed before the game was over.

Page 6 has reporting on game 1 the night before. (see)

Other news of the day. Light browning with minor spine wear, otherwise good.

wikipedia notes: The 1934 World Series matched the St. Louis Cardinals against the Detroit Tigers, with the Cardinals' "Gashouse Gang" winning in seven games for their third championship in nine years.

The Cards and Tigers split the first two games in Detroit, and Detroit took two of the next three in St. Louis. St. Louis proceeded to win the next two, including an 11–0 embarrassment of the Tigers in Detroit to win the Series. The stars for the Cards were Joe Medwick, who had a .379 batting average with one of St. Louis' two home runs and a series-high five RBI, and the Dean Brothers, Dizzy and Paul, who combined for all four of the teams wins with 28 strikeous and a minuscule 1.43 earned run average. 1934's World Series was the last of which both teams were led by player-managers.

The Cardinals and Tigers have met twice in the World Series since 1934; in 1968 (won by the Tigers in seven games) and 2006 (won by the Cardinals in five games). Tigers pitcher Denny McLain, who won one of the games in the 1968 Series, had won 31 games during the season, outdoing Dizzy Dean. Dizzy, age 57 in 1968, posed for a picture with McLain.

The Cardinals used eight (8) pitchers with a team earned-run average of 2.34 for the Series. But only two earned victories; brothers Dizzy Dean with two (2) wins and Paul Dean with the other two (2) wins.

Pete Fox played for the losing team yet became the only World Series player to hit six (6) doubles in any Series of any length. Also for the losing team, Anthony Smith hit the winning grand slam in Game 4 down by three with two outs bottom of the ninth with a corked bat.

In the sixth inning of Game 7, Joe Medwick slid hard into Marv Owen, the Tigers' third baseman, after hitting a triple. They tangled briefly, and when Medwick went to his position in left field, the Detroit fans, knowing the game was lost (the score was 9–0 by then), vented their frustrations on Medwick, throwing fruit, vegetables, bottles, cushions, etc., at him. Commissioner Landis ordered Medwick (and Owen) benched to end the ruckus. Newsreel footage shows Medwick slamming his glove onto the dugout bench in disgust. (Audio)

Dizzy Dean nearly took himself out of the Series on a play in Game 4. In the fourth inning, he pinch-ran and literally broke up a double play attempt by taking the relay through in the noggin. The unconscious Dean was rushed to a hospital for observation. He was given a clean bill of health. Legend has it that at least one newspaper the next day featured the headline, "X-ray of Dean's head shows nothing." Dean had recovered from this trauma sufficiently to make his next starting assignment, the very next day.

According to The Fireside Book of Baseball by Charles Einstein, in the seventh game Frisch called time and walked over from second base to the mound to tell Dean "If you don't stop clowning around, I'll take you out of the game." Dizzy said, "No you won't." Frisch thought about this a moment. Then he returned to second base.