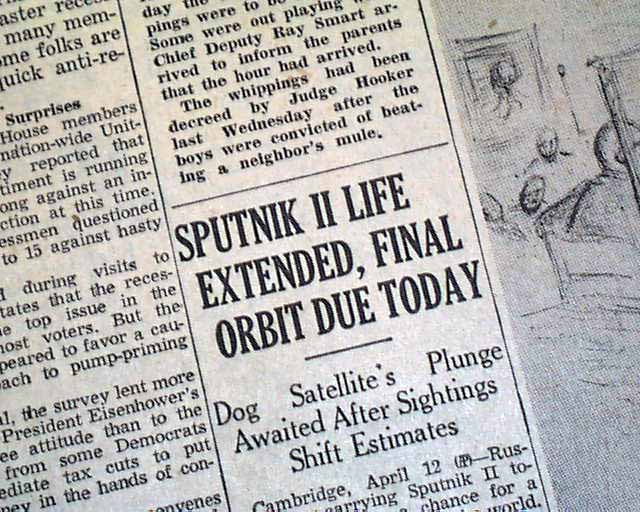 wikipedia notes: Sputnik 2 (Russian: Ð¡Ð¿ÑÑÐ½Ð¸Ðº-2, Satellite 2) was the second spacecraft launched into Earth orbit, on November 3, 1957, and the first to carry a living animal, a dog named Laika. It was a 4 meters (13 feet) high cone-shaped capsule with a base diameter of 2 meters (6.5 ft). It contained several compartments for radio transmitters, a telemetry system, a programming unit, a regeneration and temperature control system for the cabin, and scientific instruments. A separate sealed cabin contained the dog Laika.

Engineering and biological data were transmitted using the Tral D telemetry system, which would transmit data to Earth for a 15 minute period during each orbit. Two photometers were on board for measuring solar radiation (ultraviolet and x-ray emissions) and cosmic rays. Sputnik 2 did not contain a television camera; TV images of dogs on Sputnik 5 are commonly misidentified as Laika.

Sputnik 2 was launched into a 212 x 1660 km (132 x 1031 mile) orbit with a period of 103.7 minutes on an essentially unmodified ICBM R-7, similar to the one used to launch Sputnik 1. After reaching orbit the nose cone was jettisoned successfully but the Blok A core did not separate as planned. This inhibited the operation of the thermal control system. Additionally some of the thermal insulation tore loose causing interior temperatures to reach 40 °C (104 °F). It is believed Laika survived for only a few hours instead of the planned ten days because of the heat. The orbit of Sputnik 2 decayed and it reentered Earth's atmosphere on 14 April 1958 after 162 days in orbit.