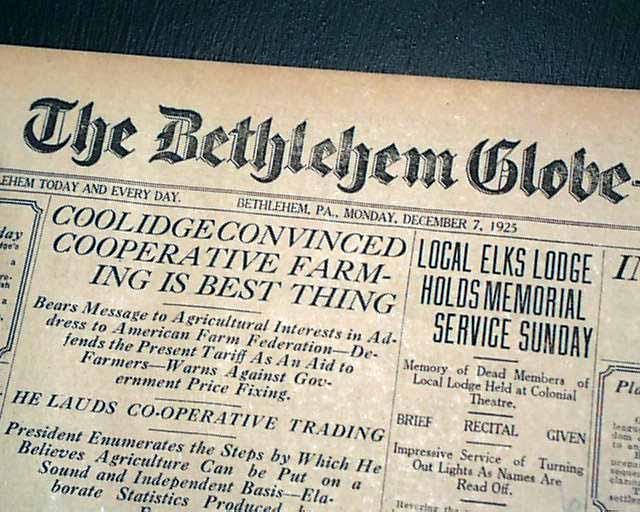 This 20 page newspaper has two column headline on page 9 that include: "'RED' GRANGE RECEIVES ABOUT $470 A YARD FOR HIS WORK AS PROFESSIONAL PLAYER"
and more. (see) 1st report coverage on Red Grange playing in a pro football game at the famed Polo Grounds.
Other news of the day. Usual browning with minor margin wear, otherwise good.

wikipedia notes: Harold Edward "Red" Grange (June 13, 1903 – January 28, 1991) was a professional and college American football halfback for the Chicago Bears and the short-lived New York Yankees. He was a charter member of both the College and Pro Football Hall of Fame. In 2008, he was named the greatest college football player of all time by ESPN.

He signed with the NFL's Chicago Bears the day after his last college game; player/manager George Halas agreed to a contract for a 19-game barnstorming tour which earned Grange a salary and share of gate receipts that amounted to $100,000, during an era when typical league salaries were less than $100/game. That 67-day tour is credited with legitimizing professional football in the United States.

On December 6, 1925, more than 65,000 showed up at the Polo Grounds to watch Grange, helping save the New York Giants' franchise. Grange scored a touchdown on a 35-yard interception return in the Bears' 19-7 victory. Offensively, he ran for 53 yards on 11 carries, caught a 23-yard pass and completed 2-of-3 passes for 32 yards.