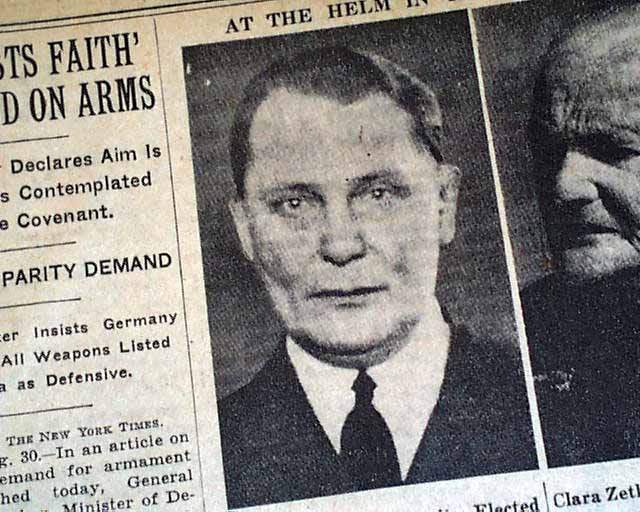 This 36 page newspaper has one column headline on the front page that include: "REICHSTAG IS CALM; WILL ASK HINDENBURG TO LET IT CONTINUE" "Nazi Is Elected Speaker--'Toleration' of the Present Cabinet Is Likely" "Red Assails The President"

Continues on page 9 with other related headlines and photo of Goering with caption: "At The Helm In The New Reichstag"

wikipedia notes: Hermann Wilhelm Goering (12 January 1893 – 15 October 1946) was a German politician, military leader and a leading member of the Nazi Party. Among many offices, he was Hitler's designated successor and commander of the Luftwaffe (German Air Force). With twenty-two confirmed kills as a fighter pilot, he was a veteran of the First World War and recipient of the coveted Pour le Mérite ("The Blue Max"). He was the last commander of "The Red Baron", Manfred von Richthofen's Jagdgeschwader 1 air squadron.

Following the end of the Second World War, Göring was convicted of war crimes and crimes against humanity at the Nuremberg Trials. He was sentenced to death by hanging, but committed suicide by cyanide ingestion the night before he was due to be hanged.