Home > Back to Search Results > Michigan Rose Bowl in 1948...
Click image to enlarge 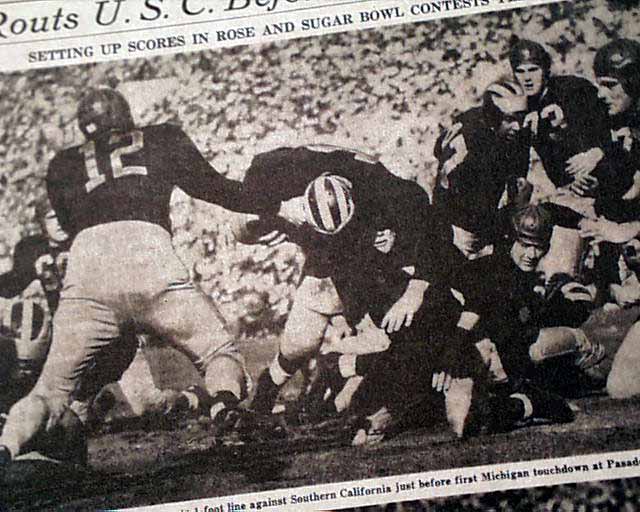 This 56 page newspaper has a banner headline on page 17: "Michigan Routs U.S.C. Before 93,000 in Rose Bowl; Texas Topples Alabama" with subheads and related photo.

Also reports on the Orange, Cotton and Sugar Bowl games with more photos and stats. Too much to photograph.

wikipedia notes: The 1948 Rose Bowl was a college football bowl game played on January 1, 1948. It was the 34th Rose Bowl Game, and the second since the Big Nine Conference and the Pacific Coast Conference reached an exclusive agreement to match their champions in the game each year. In the game, the Michigan Wolverines defeated the USC Trojans 49-0. Michigan halfback Bob Chappuis was named the Rose Bowl Player of The Game when the award was created in 1953 and selections were made retroactively.

Michigan tied the record for the most points scored by a team in the Rose Bowl, first set by the 1901 Michigan Wolverines in the first Rose Bowl and later matched by USC in 2008. Michigan also tied the game's record for largest margin of victory also set by the 1901 Michgan team that defeated Stanford by an identical 49-0 score. The record of seven PATs converted by Michigan kicker Jim Brieske remains unbroken, but was tied in 2008 by USC's David Buehler.

The game was aired by local station KTLA in the first telecast of a bowl game in the Greater Los Angeles Area. It was also the first time a U.S. motion picture newsreel was taken in color. In a special AP Poll following the game, Michigan replaced Notre Dame as the 1947 national champion by a vote of 226 to 119.