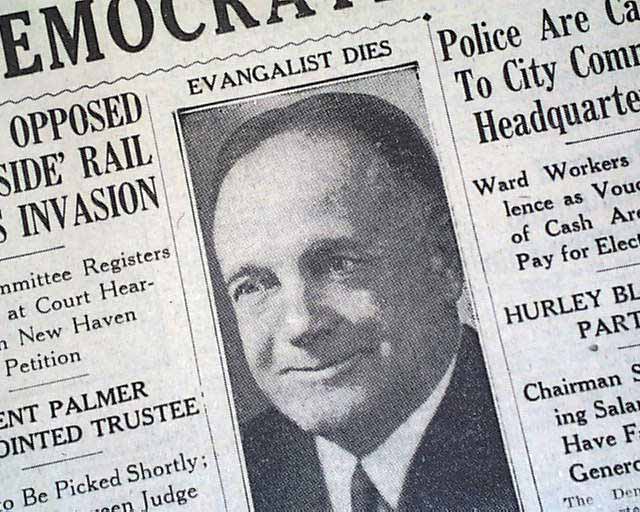 wikipedia notes: William Ashley "Billy" Sunday (November 19, 1862 – November 6, 1935) was an American athlete and religious figure who, after being a popular outfielder in baseball's National League during the 1880s, became the most celebrated and influential American evangelist during the first two decades of the 20th century.

Born into poverty, Sunday spent some years in an orphanage before taking a series of odd jobs in several small Iowa towns as he demonstrated his prowess in amateur athletics. His exceptional speed provided him the opportunity to play baseball in the major leagues for eight years. He was known for his daring base-running and dramatic outfield play, but he was only an average hitter.

Converted to evangelical Christianity in the 1880s, Sunday left baseball for the Christian ministry. He gradually developed his skills as a pulpit evangelist in the Midwest and then, during the early 20th century, he became the nation's most famous evangelist with his colloquial sermons and frenetic delivery.

Sunday held heavily reported campaigns in America's largest cities, made a great deal of money, and was welcomed into the homes of the wealthy and influential. Perhaps more than a million people came forward at his invitations, and he may have personally preached the gospel of Jesus Christ to more people than any other person in history up to that time. Sunday was a strong supporter of Prohibition, and his preaching almost certainly played a significant role in the adoption of the Eighteenth Amendment in 1919.

Despite questions about his income, no scandal ever touched Sunday. He was sincerely devoted to his wife, who also managed his campaigns. But his three sons disappointed him, and his audiences grew smaller during the 1920s as Sunday grew older and alternate sources of entertainment preoccupied his countrymen. Nevertheless, he continued to preach and remained a stalwart bolster of conservative Christianity until his death.