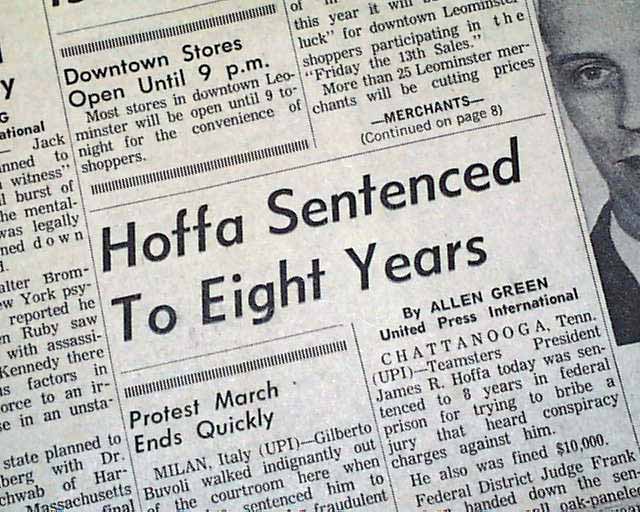 This 14 page newspaper has a two column headline on the front page: "Hoffa Sentenced To Eight Years".

wikipedia notes: In 1964, Hoffa was convicted of attempted bribery of a grand juror and jailed for 15 years. On December 23, 1971, however, he was released when President Richard Nixon commuted his sentence to time served on the condition he not participate in union activities for 10 years. Hoffa was planning to sue to invalidate that restriction in order to reassert his power over the Teamsters when he disappeared at, or sometime after, 2:45 pm on July 30, 1975 from the parking lot of the Machus Red Fox Restaurant in Bloomfield Township, Oakland County, Michigan, a suburb of Detroit. He had been due to meet two Mafia leaders, Anthony "Tony Jack" Giacalone from Detroit and Anthony "Tony Pro" Provenzano from Union City, New Jersey and New York City.