Home > Back to Search Results > Al Capone is released from prison...
Click image to enlarge 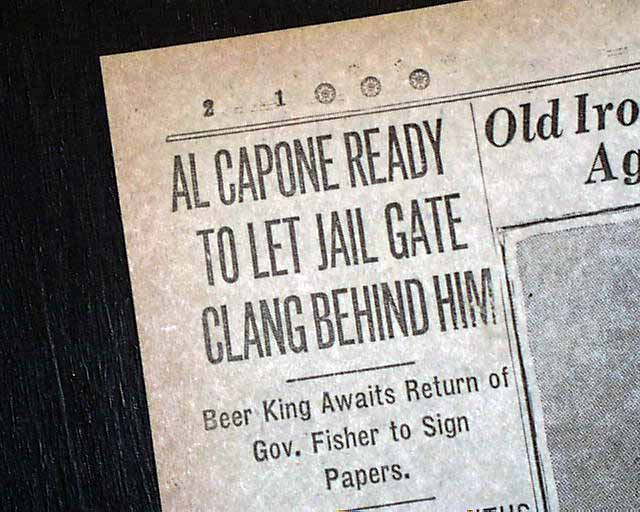 Al Capone is released from prison...

This 16 page newspaper has a small one column headline on the front page: "Capone Release Papers Signed by Governor".

wikipedia notes: Alphonse Gabriel "Al" Capone (January 17, 1899 – January 25, 1947), was an Italian-American gangster who led a crime syndicate dedicated to smuggling and bootlegging of liquor and other illegal activities during the Prohibition Era of the 1920s and 1930s.

However, Capone was not always a crime lord. Born in 1899 Brooklyn to Southwestern Italian immigrants Gabriele and Teresina Capone, Capone began his career in Brooklyn before moving to Chicago and becoming the boss of the criminal organization known as the Chicago Outfit— although his business card reportedly described him as a used furniture dealer.

By the end of the 1920s, Capone had gained the attention of the Federal Bureau of Investigation following his being placed on the Chicago Crime Commission's "public enemies" list. Although never successfully convicted of racketeering charges, Capone's criminal career ended in 1931, when he was indicted and convicted by the federal government for income-tax evasion.