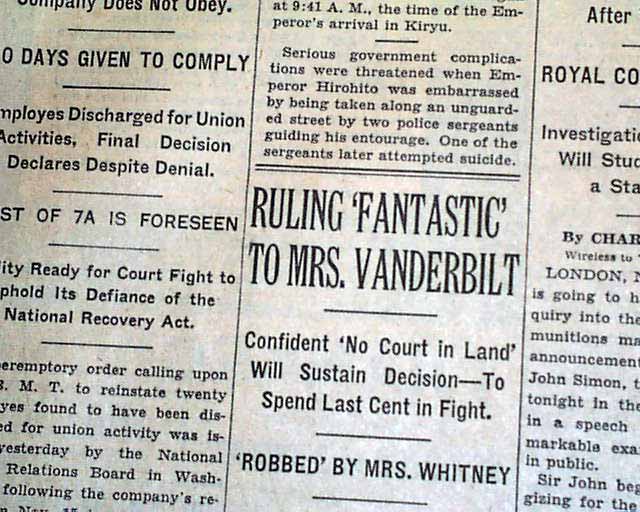 This 40 page newspaper has one column headlines on the front page that include: "RULING 'FANTASTIC' TO MRS. VANDERBILT", "'Robbed' By Mrs. Whitney" and more. Continues on page 7 with a two column photo of Mrs. Gloria Morgan Vanderbilt.

wikipedia notes: Influenced by reports from private detectives as well as family servants, members of the powerful Vanderbilt family believed that Gloria was a bad influence and neglectful of her daughter and a custody battle erupted that made national headlines in 1934. As a result of a great deal of hearsay evidence admitted at trial, the scandalous allegations of the elder Gloria's lifestyle—including a lesbian relationship with Nada, Marchioness of Milford Haven (a member of the British royal family) and an affair with a German prince who was rumored to be a fortune-hunter—led to a new standard in tabloid newspaper sensationalism.

Vanderbilt lost custody of her daughter to her influential sister-in-law Gertrude Vanderbilt Whitney (1875–1942). Granted only limited parental rights, a devastated Vanderbilt was unable to spend much time with her daughter and under the influence of the child's aunt, their relationship became virtually nonexistent.

The court also removed Vanderbilt as administrator of her daughter's trust fund, whose annual investment income had been her only source of support.